By Seo Jee-yeon
Published : Jul 4, 2016 - 17:25       Updated : Jul 11, 2016 - 17:19
[DECODED] The year 2015 was a watershed year for Hyundai Motor Group’s heir apparent Chung Eui-sun not only because of his expanded role and responsibility in leading projects for future growth like the launch of Hyundai Motor’s first luxury car brand Genesis, but also because of his increased presence in the group’s ownership structure. 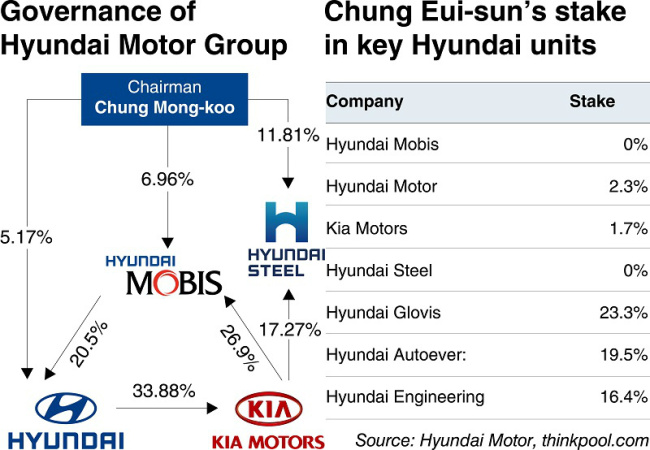 Group officials said the junior Chung bought the shares to protect shareholder interests and to ensure stable management of Hyundai Motor. But many stock market analysts said his move was aimed to increase his presence in the group’s ownership structure.

The 46-year-old No. 2 man in Hyundai Motor Group has built his own reputation as a professional executive by being trained for more than two decades at different affiliates of the automaker giant rarely with a vertically-integrated supply chain for the car business.

He is one of few third-generation business leaders of family-controlled Korean conglomerates, or chaebol, to have climbed the corporate ladder based on his performance evaluation. His biggest business success story is the turnaround of Kia Motors, which was suffering mounting losses around 2008. While serving as chief executive of Kia between 2005 and 2008, Chung introduced design-driven management to rebuild the brand image of Kia with then Volkswagen’s chief designer Peter Schreyer, who joined Kia as chief designer in 2006.

In 2009, Chung was promoted to vice chairman of Hyundai Motor. Currently, he is responsible for planning, sales and marketing functions at the nation’s largest carmaker. Key projects under his leadership include the incubation of Genesis as a global luxury brand and the debut of Hyundai’s “N” performance brand next year.

“Growing up while witnessing the rise of Hyundai as the eldest grandson of the late Hyundai Group founder Chung Ju-yung, he keeps Hyundai’s can-do spirit and entrepreneurial approach to issues in his blood,” an industry insider said.

In contrast to his achievements in business over the past two decades, however, the junior Chung has made little progress in increasing his stake in the group’s key units, which is critical for the completion of a power transfer. As of June this year, his shareholdings in Hyundai Motor, Kia Motors and Hyundai Mobis amounted to 2.3 percent, 1.7 percent and 0 percent, respectively.

“Vice chairman Chung’s recent stock purchases advanced him to become the second biggest individual shareholder of Hyundai Motor after his father, with a 5.2 percent stake, which could affect a Hyundai Mobis-centered succession scenario,‘’ said Lee Sang-hyun, a stock market analyst from IBK Securities and Investment.

A succession plan at a chaebol organization is a taboo internally unless the authoritarian father and chairman allows it to develop or be discussed.

“Succession is something you never mention in the chairman’s presence,” a corporate insider said.

And so observers outside of the empire tend to churn out scenarios for power transfer at chaebol based on shareholdings structure.

Chairman Chung controls the group with his 7 percent stake in Hyundai Mobis.

The problem is that his apparent heir, who will lead the Hyundai empire, has not a single share in Hyundai Mobis.

The transfer of his father’s shares of Hyundai Mobis to the son has not been an option due to a sizable inheritance tax.

Under this ownership structure, corporate governance experts have played a guessing game to figure out how Chung Eui-sun would secure control over Hyundai Mobis for succession.

“The auto giant could seek the establishment of a holding company by merging the three investment units split from Hyundai Motor, Kia Motors and Hyundai Mobis and then merging Hyundai Glovis with the holding company, which will allow Chung to secure a control over the new holding entity,” said Jeon Yong-ki, an analyst from Hyundai Securities.

Despite the complication of procedures, Jeon’s scenario has gained attention in the market since the government launched a three-year temporary ruling, dubbed a “one shot” act, to ease regulations and offer tax benefits to help conglomerates to revamp their business portfolio, aimed at raising competitiveness in the global market.

Regarding Chung’s next move related to governance, Jeon said he is likely to focus on raising his influence in Hyundai Motor with additional stock purchases.

Chung is considered the strongest candidate to buy a 0.75 percent stake in Hyundai Motor that Hyundai Heavy Industries and Hyundai Samho Heavy Industries have put on the market. The two shipbuilders included the additional stock asset selling plan in their self-rescue plan to improve financial health.

There is also little possibility of seeing a family feud in the succession process, unlike in some other chaebol families. Chung’s three female siblings are unlikely to compete with him for group control, as they have either remained out of the corporate world or sit on an executive seat in a noncore affiliate.

“The biggest challenge ahead of revamping the governance structure for succession is the father’s will. The son is destined to stay in his father’s shadow as far as his father continues to be active in management,” an industry insider said, asking not to be named.