Hwang, who is on a five-day visit to China, made the remarks during a meeting with South Korean correspondents in Beijing ahead of meetings with Chinese leaders, including President Xi Jinping and Premier Li Keqiang.

North Korea, which has been hit by tougher U.N. sanctions following its fourth nuclear test in January, claimed last week that it successfully test launched an intermediate-range ballistic missile. 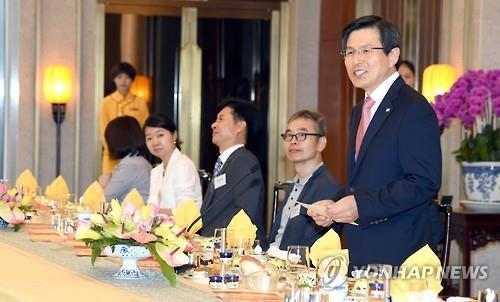 North Korea calls the mid-range ballistic missile the Hwasong-10, which is also known as the Musudan to the outside world.

South Korea will sternly deal with North Korea's nuclear issue and continuous provocations, including the launch of the Hwasong-10, by further strengthening coordination with China, Hwang said.

Hwang is slated to hold talks with Li later in the day, during which the Korean prime minister is expected to raise the issue of illegal fishing by Chinese fishermen in South Korean waters, according to Hwang's office.

Hwang and Li are also expected to exchange views on Britain's decision to leave the European Union. (Yonhap)