By 김지현
Published : Jun 21, 2016 - 17:07       Updated : Jun 21, 2016 - 17:45
[THE INVESTOR] Amid fierce rivalry growing over a new airport in the nation’s southeast region, the government dropped the multitrillion won project on Tuesday and said it would extend the facilities of Gimhae International Airport in Busan instead.

Based on a feasibility study conducted by ADPi, a French company specializing in airport architecture and engineering, the government will devise a comprehensive development plan within the year. The government plans to build more runways and extend the size of the passenger terminal, as well as improving traffic accessibility of the airport, said Transport Minister Kang Ho-in.

“The government believes that the conclusion was reached through comprehensive consideration in regard to aviation safety, economic feasibility, accessibility and environment,” he said.

The plan is said to be the best alternative to the new airport project, which was expected to cost around 10 trillion won ($8.65 billion). If renovated, Gimhae Airport would be able to handle the growing demand for air travel within the region in the future, he added.

Gadeokdo Island near Busan and Miryang have been vying for the project that residents and officials from both sides viewed as an opportunity to stimulate the growth of their local economies. 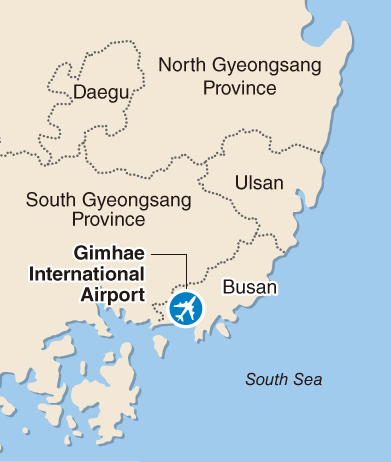 Not only the candidate cities, but also political circles, mindful of voters, jumped into the race, claiming their respective side was better suited for the project.

The presidential office has expressed concerns over a possible divide in the region, the traditional political base of the ruling conservative Saenuri Party. Politicians also feared its impact on the upcoming presidential election late next year.

The new airport project was one of President Park Geun-hye’s campaign pledges, as well as that of her predecessors. Previous administrations had given up on selecting the site for a new airport in the face of the regional rivalry.

President Park had urged officials to select the site of the new airport based on economic feasibility, not political consideration. But calls had been mounting to the nation’s top office that the president holds the key.

In an apparent attempt to quell public anger over the government canceling the project, Transport Minister Kang urged candidate cities to accept the result for the greater good.