By 이지윤
Published : Jun 13, 2016 - 18:46       Updated : Jun 16, 2016 - 14:40
[THE INVESTOR] Samsung Display’s shipments of organic-light emitting diode panels have more than doubled over the past year, as global smartphone manufacturers, including those in China, are increasingly adopting OLED displays.

The research results were obtained by The Investor, an online English business website that The Korea Herald launched on Monday.
Over the same period, total global OLED shipments surged to 91.3 million units, with Samsung making up a whopping 95 percent of that figure.

Samsung, a dominant player in OLED for mobile devices, now supplies displays for almost all OLED smartphones worldwide. There were 17 OLED smartphones in the first quarter of this year, up from just five a year ago.

UBI predicted that Samsung Display, an affiliate of Samsung Electronics, could gain a big boost when its planned supply to Apple’s iPhone starts from as early as next year. Flexible OLEDs, which are used in Samsung’s latest Galaxy S7 Edge smartphone, which has a curved screen, made up 14 percent of the company’s total shipments in the first quarter. The figure is expected to surge in the coming years with growing demand. 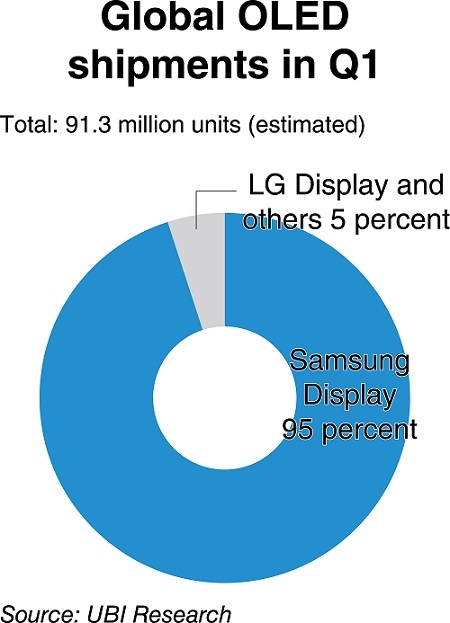 LG Display, which has put more focus on OLEDs for TVs, also saw shipments almost quadruple in the first quarter of this year. Along with LG Electronics, the company has also started supplying China’s Skyworth.

“OLED adoption among display-makers and handset manufacturers is expected to further speed up as Apple’s iPhone is highly likely to feature an OLED display later in 2017.”