The 5G network equipment used for the demonstration offered a peak download speed of 26 gigabit per second, around 350 times faster than the current Long-Term Evolution network. 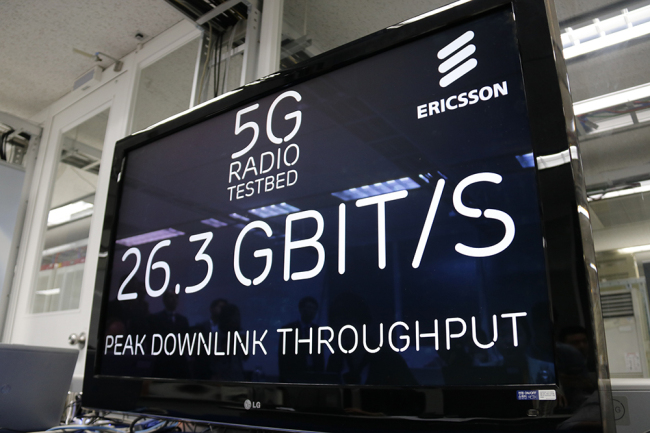 “I feel proud of the Ericsson-LG researchers at the Anyang R&D center who are contributing to achieving technical innovation for both Korean and global customers,” said Patrick Johansson, the chief executive of Ericsson-LG in Anyang City where the demonstration was held.

“Ericsson, which marks the 140th anniversary of its foundation this year and introduced the first magneto telephone switch and a telephone in 1896 in Korea, has been playing a leading role in the Korean telecom market,” said the CEO.

Johansson said the company would work together with Korean telecom firms for further promoting the 5G network.

For example, the company’s network systems can send telecom signals to a specific unmanned vehicle driving on the road and help the car to communicate with users or other cars seamlessly in real time.

The multiple-user multi-input and multi-output technology -- a core element behind the 5G beam tracking technology -- allows the transmission of sizeable data, such as those for virtual reality, hologram, and ultra-high definition videos, in an efficient manner, according to the company.

Anne Hoglund, ambassador of Sweden who participated in the demonstration, said that the collaboration between Ericsson and Korean telecom firms would help the companies gain a competitive edge in the global market.