Seoul struggles to cope with fine dust from emissions

“I can see dust-ridden cars as I work outside all day long, which makes me feel like I’m in a defenseless state,” said Kim. “I think people in Seoul, not just me, are already too exposed to fine dust,” he said, adding that he is worried, as there is not much he can do about it.

Over the recent decades, Korea’s air quality has drastically declined due to emissions from industrialized cities, pollution and dust from China as well as biomass burning from Southeast Asian countries. 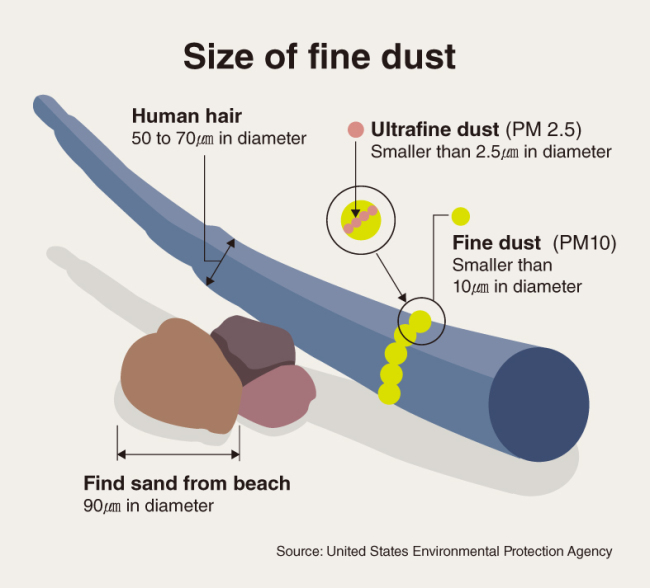 They are too small to be seen with the naked eye and are difficult to filter. Trapped in the atmosphere, fine dust can easily enter the human body through the respiratory system and cause health damage, especially to the lungs and blood vessels.

Global health institutes have also highlighted the health dangers of fine dust. The World Health Organization established an air quality guideline in 1987 to create better awareness. In 2013, the WHO-run institute International Agency for Research on Cancer declared that fine dust is classified as a carcinogenic substance.

While some of the fine dust comes from China, it is also emitted by vehicles in the city.

According to Seoul City, an experiment conducted in April showed that in Seoul, 59 percent of fine dust came from China and Mongolia’s sand storms, while 20 percent were from city emissions. The rest came from adjacent towns such as Incheon and Gyeonggi Province.

The Seoul Metropolitan Government said that old trucks and some 1,800 public buses that pass through Seoul are the main culprits that create fine dust in the city.

“In order to dramatically reduce the inflow of fine dust from different cities, we need long-term cooperation from local governments and related departments,” said an official from Seoul Metropolitan Government.

According to Seoul city’s data, there are about 18,000 public buses running across the country, with more than one third of them, or 7,000 buses, operating in Seoul, Incheon and Gyeonggi Province.

In 2002, Seoul City vowed to replace all its public buses with more environmentally friendly compressed natural gas buses and to completely replace all of them in 2014.

Seoul City highlighted the urgency of the issue and asked municipalities and the Environment Ministry to join the campaign of replacing buses with eco-friendly ones.

But whether all buses across the nation can be completely replaced is questionable due to a budget crunch, according to local governments.

Other than replacing buses, municipalities have come up with the idea of attaching a fine dust sensor to buses’ emission pipes, considering it more practical and an easier way to detect the amount of emissions.

This year, Seoul City allocated about 43 billion won to support cars with low pollutant emissions by installing sensors on the emission pipes of buses and vehicles that run in Seoul.

“The weather forecast said yesterday that I could enjoy outdoor activities, but later it was revealed that (it was) in fact ‘highly dangerous’ to engage in outdoor activity over the weekend,” said a mother of a 4-year-old son who took him to the Han River Park last weekend.

Due to several different institutes involved in the fine dust and yellow dust alert system, the government is considering assigning all three roles to one institute.

Through this first-ever NASA joint field experiment, researchers and scientists will collect air quality data over the peninsula through air crafts, ground sites and ships over 6 weeks. The U.S. and South Korean aircraft will conduct coordinated flights from Osan Air Base.
“KORUS-AQ will integrate observations from satellites, aircraft and ground sites with air quality models to understand the factors controlling air quality across urban, rural and costal boundaries in East Asia,” said James Crawford, a lead U.S. scientist for KORUS-AQ study.

During the press conference at Osan Air Base on Friday, NASA pointed out the advantage of Korea’s air space, describing it as “an ideal research setting.”

“The country is impacted by a unique mix of emissions including pollution from mainland China as well as seasonal pollution such as long-range transport of wind-blown dust,” said Crawford.

In order to capture details about air quality, a total of three airplanes with 37 instruments and 400 scientists from 93 research teams came to Korea to conduct experiments in the South Korean skies and its coastal waters.

Scientists hoped that by collecting data from more than 300 air-quality ground sites, the study will help in the future creation of an air quality observation system.

“This study will deepen our understanding of the processes controlling air quality and improve the ability of models to forecast and assess air quality conditions,” Hong added.