KB Financial Group and Korea Investment Holdings Co. have submitted a final bid for a controlling stake in Hyundai Securities as they seek expansion to compete with bigger foreign rivals, the deal's lead manager said Friday.

Besides the two, Hong Kong's private equity fund Actis also participated in the competition to acquire a 22.56 percent stake in Hyundai Securities up for sale since last year by financially-troubled Hyundai Merchant Marine Co., according to EY Han Young accounting firm. 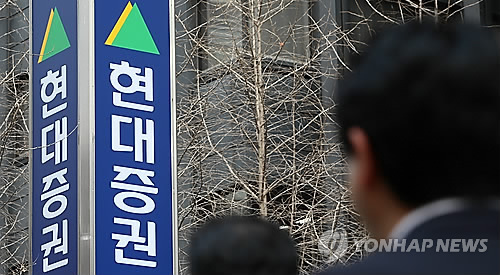 The majority stake was valued at 357.65 billion won ($356 million) based on Friday's closing price of 6,700 won. When the premium paid to management is included, the acquisition price reportedly could fetch between 700 billion won and 1 trillion won.

"We are targeting to become Asia's leading brokerage equal to Nomura Securities Co. by 2020. To achieve the goal, we badly need Hyundai Securities for expansion in size and overseas operations,"
Korea Investment Chairman and CEO Kim Nam-goo said in a shareholders meeting held Friday, according to a company spokesman.

After a shareholder meeting Friday, KB Financial Chairman and CEO Yoon Jong-kyoo told reporters the bank would offer a "proper price" for the brokerage.

KB and Korea Investment have at least two things in common.
They own brokerage units and were beaten by Mirae Asset Financial Group in the race for the takeover of Daewoo Securities Co. last year.

In the Hyundai deal, Mirae Asset remained a strong candidate until Wednesday when it abruptly bowed out of the race for the country's No. 5 brokerage house, saying it will focus on completing the Daewoo deal.

Meanwhile, the sale of Hyundai Securities is essential for Hyundai Merchant which recently asked for co-management with creditors to put its business back on track. The country's No. 2 shipping line swung to a net loss last year amid oversupply and lower freight charges. (Yonhap)