The world’s second-largest economy holds Korean state bonds worth 17.5 trillion won ($14.9 billion) as of the end of last month, surpassing the country’s previous top investor -- the U.S., which has invested about 14.4 trillion won in fixed-income securities. 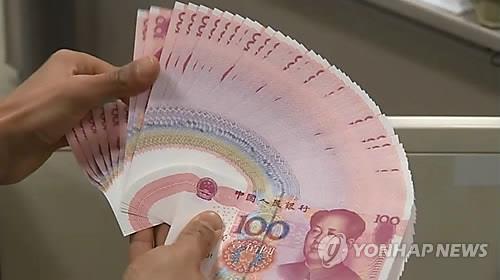 China’s Korean bond holdings now account for about 18 percent of the total bonds worth 97 trillion won held by foreign investors. The U.S. accounts for 15 percent, as the world’s largest economy unloaded Korean bonds worth about 3.6 trillion won last month. China, on the other hand, invested 74 billion won in Korean bonds in February, the FSS data showed.

China’s increasing investment in Korean bonds is in line with its drive to diversify its foreign exchange portfolio, analysts say.

“As the world’s largest holder of foreign currency reserves, China has been steadily increasing its investment in Korean bonds over the past years as part of its currency diversification,” said a FSS official.

China has $3.23 trillion in its foreign currency war chest as of January, according to the People’s Bank of China.

China has been increasing its presence in Korea’s financial landscape, investing in a variety of industries ranging from games and movies to cosmetics and insurance.

However, on the flip side, China being Korea’s single biggest investor with one-fifth of Korean bonds could pose a risk to Asia’s fourth-largest economy, should China sees its foreign currency reserves decline or become instable.

“If that happens, China would want to cash in its holdings for market stability,” Park added.

China’s currency reserves fell to their lowest in January since 2012, as it recently had to utilize its war chest and enforce regulations to curb short selling, capital outflows and stabilize the yuan through dollar sell-offs.

In February, foreign investors sold Korean bonds worth 4.4 trillion won and unloaded Korean stocks worth 200 billion won, according to the FSS data.