The 20 billion won ($16 million) project aims to incorporate the company’s own fleet management and auto fare collection solutions into some 400 buses that will start operating in August 2017. 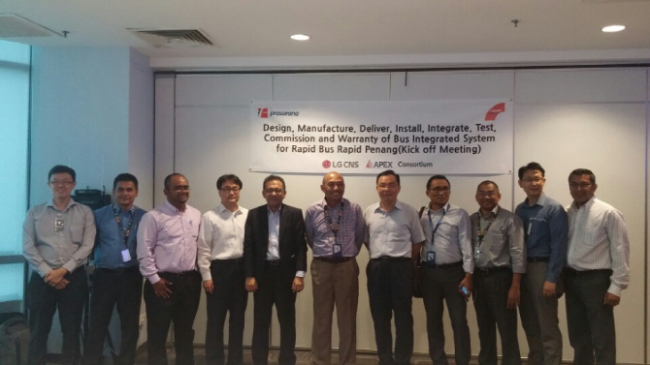 LG CNS has been expanding its presence in Malaysia with its smart transportation solutions.

The company has participated in the country’s $120 million Mass Rapid Transit project that connects Kuala Lumpur via high-speed trains.

In 2012, the company secured a deal to build telecom systems for the MRT trains. In February this year, the company won another deal to install bus traffic-control systems in MRT railway stations.

Currently, line 1, which stretches about 51 kilometers and has 31 stations, is under construction. It is slated for completion by 2017. The government plans to pour an additional 30 trillion won into the construction of lines 2 and 3 this year.

With the latest deal, LG CNS said it has secured a competitive edge in future biddings to win more orders.

“After securing a series of deals in Malaysia, we will continue efforts to expand our presence, not just in the Southeast Asian market, but also in Latin America, Middle East and Europe,” said Lee Eung-joon, the company’s traffic-solutions business director.

The company has also secured projects in other cities around the world, including Bogota and Pasto in Colombia, Athens in Greece and Wellington in New Zealand