By Seo Jee-yeon
Published : Mar 9, 2016 - 20:34       Updated : Jun 10, 2016 - 15:09
Board membership of South Korean business tycoons is emerging as a main interest for investors ahead of annual shareholders meetings in March, as responsible leadership is required amid worsening business conditions. 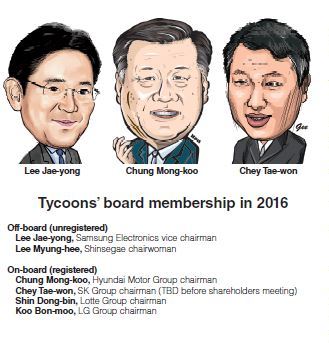 Entry to the board of directors involves becoming a registered board member with the obligation to be responsible for management decisions.

Some of top management at Korea’s family-controlled conglomerates, dubbed chaebol, however, continue to exercise power over management issues from outside the boardroom, despite growing demand for responsible leadership.

Samsung Electronics vice chairman Lee Jae-yong is an influential business leader, exercising his power over the nation’s largest conglomerate, but actually has no legal responsibility over management decisions he influences as he is not a member of the board.

He has led the tech-driven conglomerate, pushing for reforms in Samsung’s business portfolio and sales of assets for the past nearly two years, since his father, group chairman Lee Kun-hee, was hospitalized in May 2014.

There was a rumor that he might sit on the board of Samsung C&T, the de facto holding company of the group, this year, as he has around 17 percent stake.

Samsung C&T, however, confirmed the junior Lee would not be on the board this year.

“It is an example of imbalance between power and responsibility among chaebol owners,” the Solidarity for Economic Reform group said in a recent report.

Shinsegae, a leading retail giant, is another case where the firm’s top management with controlling power over the group remains an unregistered board member.

The trend of the absence of a chairperson on the board was accelerated in 2013 as the nation’s financial authority enforced the Capital Market Act to oblige companies to reveal the pay of board members who earn more than 500 million won ($410,000) a year.

With the recent revision of the act, top five registered board members have to disclosure their annual salary from 2018.

For checks and balances in a company controlled by unregistered executives, Chae Yi-bae, a researcher from the SER, stressed the importance of the independence of outside directors and the facilitation of shareholders’ votes.

Changes in the board of directors will be one of the hot potatoes at the shareholders meeting for SK Group, the nation’s third-largest conglomerate, as well. The SK case, however, is the opposite of Samsung.

Group chairman Chey Tae-won is trying to return to the board of SK Holdings with the approval of shareholders on March 18 to push for new business projects for growth under his leadership. He had stepped down from the board in 2013 when he was sentenced to four years in jail for embezzlement. He was pardoned by President Park Geun-hye in August 2015.

Hyundai and LG are free from the board membership issue this year, as the chairperson of each conglomerate will continue to lead the board of the flagship affiliates.