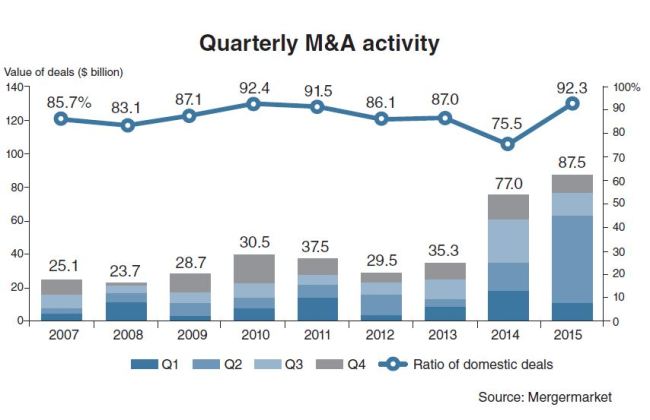 A total of 362 deals worth $87.5 billion were signed last year, nearly a threefold increase in deal size from the figure in 2012, according to data by Mergermarket.

Korea accounted for 9.4 percent of the total deal amount in Asia. China was the region’s top M&A market with $486.9 billion worth of deals last year, followed by Hong Kong.

“Korean large conglomerates pushed for mega deals as part of their efforts to improve corporate governance structure and business portfolio restructuring, which was the key driver behind the 2015 M&A market growth,” said Kim Kyu-lim, senior researcher at the Korea Capital Market Institute.

Two multibillion-dollar mergers between affiliates of the country’s leading conglomerates accounted for 40.8 percent of the total volume in Korea. They were the $24.4 billion purchase of SK Holdings, the holdings company of SK Group, by the group’s information technology service unit SK C&C. and Samsung C&T’s $11.3 billion merger with its sister firm Cheil Industries.

Such transactions led domestic deals to dominate M&A activities during the year, accounting for 92.3 percent, or $80.9 billion, of the total volume.

This year, M&A activities are expected to crank up as the “one shot” bill, which aims to ease regulations on business reshuffling and M&A transactions, is expected to take effect.

“Spurred by deregulations on M&A activities and a growing need for business restructuring by Korean companies, the demand for deals will continue to increase,” Kim said.

However, overseas M&A activity by Korean companies has been on the downward path since 2011. The total overseas deals amounted to $3.6 billion in 2015, up 12.5 percent from a year earlier, but lags far behind the 2010 volume of 10.9 billion won. Total volume of deals by foreign investors in the country was $6.7 billion last year.