According to Korea Economic Research Institute, Korea Investment Corp. has invested only 8 percent of its funds in real estate, private equity and infrastructure in 2014, significantly lower than other sovereign funds including China Investment Corp. which allocated 37.7 percent in the nontraditional sectors in the same year. Singapore’s GIC Pvt. Ltd. also managed 16 percent of its national wealth fund in alternative investments.

The figure was even lower than the National Pension Service, the report said. The separate asset management arm of Korea’s public pension fund, that has long focused on traditional investments, has allocated 9.9 percent of its funds in alternatives, nearly 2 percent higher than that of KIC. 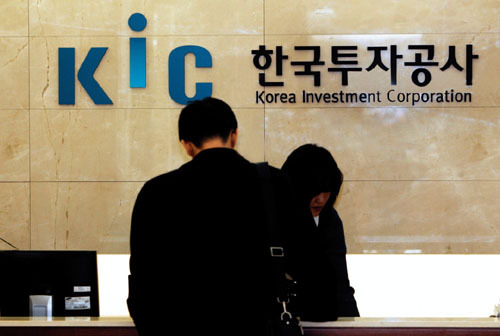 The report’s author, Chang Seong-ryeol, warned that KIC has remained passive in alternative investments, even though the sovereign fund enjoyed higher returns than its traditional investments in stocks and bonds.

In the last five years, KIC earned 8.3 percent return on alternatives while it saw 5.83 percent in profit from its investments in stocks and bonds.

However, Eun Sung-soo, new CEO of KIC, said he wouldn’t rush into riskier investments to shore up the return rate, referring to the growing financial volatility.

His predecessor, Ahn Hong-chul, had vowed to boost its alternative asset portfolio to 25 percent by 2020. But Eun said he has lowered it to 20 percent. Alternatives currently account for 12.4 percent of the fund’s total investment worth $91.8 billion. By Korean law, the KIC is mandated to buy foreign assets only.

Chang also advised KIC to explore other investment avenues not just alternatives by setting up joint ventures or mergers and acquisitions.

“It is a global trend of (sovereign funds) increasing the portfolio of alternative investments, rather than focusing on stocks and bonds that no longer guarantee profits in the slowing economy,” he said.

The Government Pension Fund Norway, the largest sovereign fund in the world by assets, has also boosted its investment in real estate in recent years, diversifying from its focus on well-known assets.

China’s CIC is not only expanding its alternative portfolio, but is also supporting the state‘s drive in securing energy resources worldwide by leading M&As of energy companies by Chinese firms.

“Korea should diversify its investment portfolio, following the global trend. This would not only increase profits but also contribute in developing the country’s finance market,” said Chang.