Large companies have announced plans to invest some 8.2 trillion won ($6.7 billion) into the so-called new energy sectors by 2017, calling for government assistance.

The new energy sectors, which cover such areas as energy storage systems, electric vehicles, renewable energy, and technologies to improve energy efficiency have all become big business in recent years, as countries around the world try to cut back on greenhouse gases released into the atmosphere.

Chairing a meeting attended by some 30 top managers from companies like Samsung, Hyundai Motor, LG and the Korea Electric Power Corp., Minister of Trade, Industry and Energy Joo Hyung-hwan stressed that the government is committed to getting rid of unnecessary regulations holding up investments. 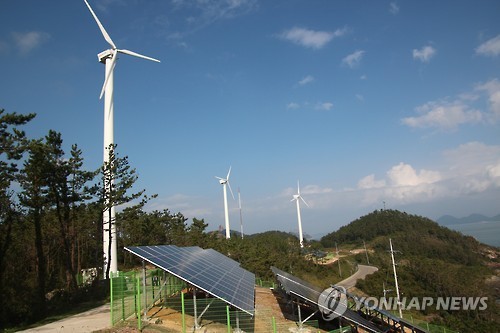 "This can allow more funds to be allocated and boost the country's exports," he said.

South Korea's exports backtracked 8 percent on-year in 2015 with economic growth, closely tied to trade, falling to 2.6 percent, down from 3.3 percent in 2014.

He said the government will foster tie-ups between state-run enterprises and private companies that can reduce the risks associated with entering overseas markets by the latter.

In addition, Joo said Seoul will actively support the creation of the so-called convergence alliances between firms so they can pool their research and development resources and bolster their future competitiveness.

The minister said that the government will take a leading role in getting local small and medium enterprises to enter such areas as the production of smart meters and software to better manage energy consumption.

"State enterprises will take the lead in making critical infrastructure investments that can ensure profitability and reduce risks for the private sector," Joo claimed.

He said investment in power recharging stations for EVs and the creation of a ESS-related power exchange market are some of the measures that will be pushed forward in the coming months. (Yonhap)