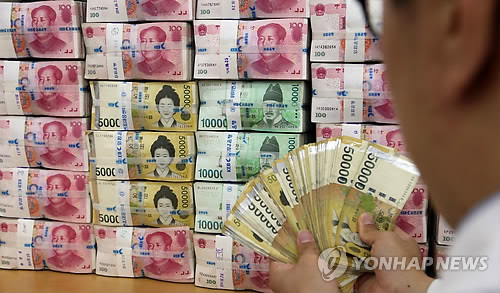 The December tally marked a 7.5 percent increase from a year earlier.

The M2 refers to currency in circulation, including bank debentures and deposits, with a maturity of less than two years, along with stock investments. It does not cover government or corporate bonds.

The M2 had been on a steady rise since at least November 2014 after the central bank began slashing its key rate in August the same year to help bolster spending and growth in Asia's fourth-largest economy.

The slight decline in December was apparently caused by a U.S. rate hike in the same month that marked the first of its kind in nearly a decade.

Consumer sentiment here quickly froze while foreign investors began pulling out of the local market in a near exodus.

The consumer sentiment index dipped to a 4-month low of 103 in December, losing 3 points from the previous month.

On the other hand, the amount invested in money market funds, or short-term debt securities, dropped 5.1 trillion won from a month earlier. (Yonhap)