Outstanding household loans from local banks came to 641.3 trillion won ($530 billion) as of end-January, up 2.2 percent from the previous month, according to data from the Bank of Korea. 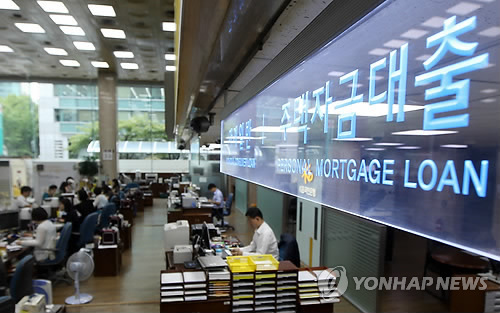 The on-month increase compares with a 6.9 percent gain in December.

The rise was solely attributed to an increase in home-backed loans, which grew 2.8 percent on-month to 479.9 trillion won.

Credit loans, on the other hand, slipped 0.6 percent from the previous month to 160.6 trillion won.

The consumer sentiment index dipped to a 4-month low in December, BOK said earlier, while foreign investors offloaded some 6.5 trillion won in the local stock market during what has been recorded the longest selling streak of 37 consecutive sessions from Dec. 2.

The rise in home-backed loans in January also slowed from 6.2 percent on-month in the previous month.

In January, the number of home transactions plunged 21.4 percent on-year to 62,365. The January figure also marked a 29-percent cut from the previous month.