South Korea plans to jack up its fiscal spending by an additional 21 trillion won ($17.4 billion) in the first quarter in an effort to pump-prime the economy struggling with faltering exports, the finance ministry said Wednesday.

It will also extend a consumption tax cut program on passenger cars, which was set to finish at the end of December, to June to bolster domestic demand. 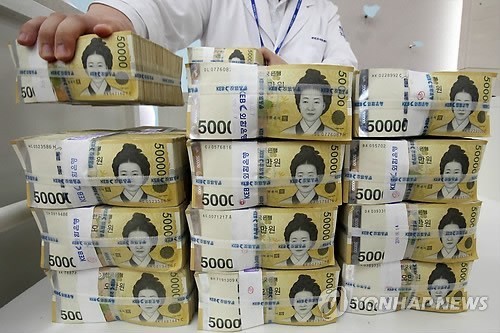 Asia's fourth-largest economy is grappling with plummeting exports in the face of a crippling downturn in oil prices and waning global demand, with its domestic consumption remaining in the doldrums.

Its exports, the country's key economic driver, plunged 18.5 percent in January from a year earlier, the largest on-year drop in more than six years, while its consumer prices grew less than 1 percent last month for the first time in three months

The Ministry of Strategy and Finance said it will add 6 trillion won to the original 138 trillion won in fiscal spending earmarked for the January-March period, including educational expenditures.

As a result, the government will frontload more than 40 percent of its 330.6 trillion won budget for 2016 in the first quarter, up

10 percentage points from its earlier plan.

The ministry will also pour an additional 15.5 trillion won in policy financing in the first three months, with the total number rising to 115.9 trillion won from 100.4 trillion won.

Eight policy financial institutions including the Korea Development Bank and the Industrial Bank of Korea will give out cheaper loans to local exporters and enterprises.

"Nevertheless, we expect the increased frontloading to push up growth by 0.2 percentage point."

The government has emphasized the importance of the first quarter in order to achieve its 2016 growth target of 3.1 percent amid rising economic uncertainties at home and abroad such as contracted consumption, a slowdown in China and fast falling oil prices.

The ministry is confident of attaining the target growth rate as they go through the crucial first quarter.

"If there are no other changes in circumstances, I see we can closely reach there," said Lee.

To cope with a possible drop in domestic consumption, the finance ministry will again lower special excise taxes on cars to 3.5 percent from 5 percent during the January-June period.

"We came up with the tax cut program in a bid to create demand for cars and help companies expand production. It is part of our efforts to stave off a psychological contraction in the industry," said the deputy finance minister. "We were to terminate the program at the end of last year, but we decided to renew it due to unexpected downside risks."

The tax cut program, first imposed in August last year and scheduled to expire in December, was regarded as a successful fiscal policy to fuel private consumption in the second half of last year.

Retail sales have been on a roll since September, with the amount hitting a record high in December at 33.2 trillion won while sales of domestic cars jumped 17.7 percent on-year in December, up from a 16.3 percent gain a month earlier. (Yonhap)