Instead of tearing down buildings and starting anew, regions across Korea have given neglected areas a new purpose for public use. Here are eight urban renewal projects that aim to transform rural, run-down or deserted areas into praised landmarks. 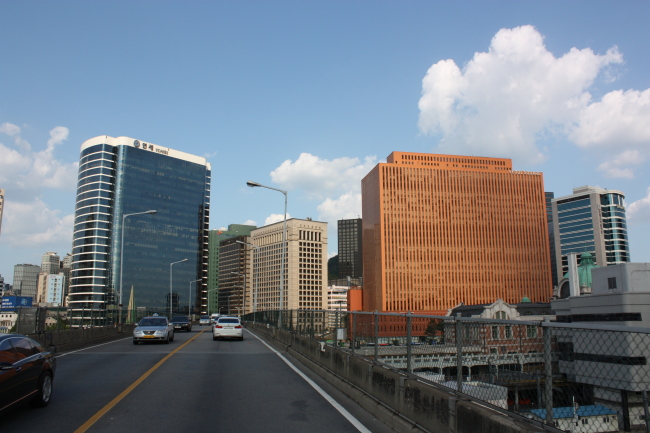 The Seoul city government plans to transform Seoul Station overpass, a 1-kilometer-long section of a flyover near Seoul Station, into a pedestrian walkway as part of its urban renewal projects. Dubbed Korea’s version of New York’s High Line Park, the park plan aims to boost the neighboring markets and to preserve the historic heritage.

The high-rise has been considered a part of Seoul’s heritage since the industrialized era in the 1970s, but concerns have been growing over its safety. The plan has been delayed in the face of resistance from local merchants nearby who fear  losing customers as well as from police concerned that the construction work could further aggravate  traffic. With the police accepting the city’s proposal to reduce traffic, the city started the construction late last month. The pedestrian park is scheduled to open in 2017.

Renowned Dutch architect Winy Mass is in charge of changing the overpass into a high-rise garden, like a giant tree with various plants. Street lights will be installed on the 17 adjacent roads to make them look like tree branches.
(rene@heraldcorp.com) 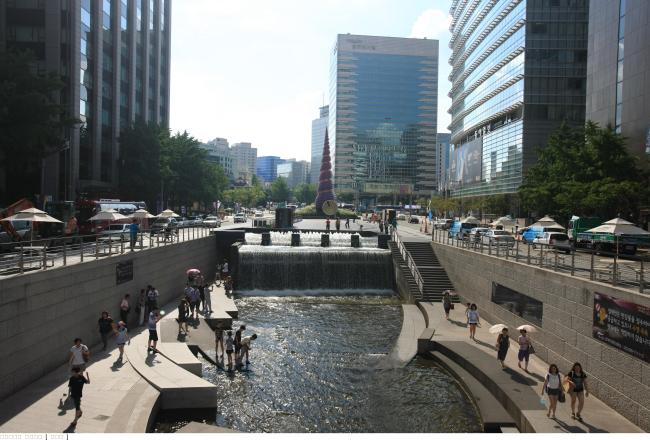 Cheonggaecheon Stream was constructed in 1411 of Joseon era (1392-1910) to prevent flood danger. It gradually served an important role in people’s lives, with more residents living around the stream.

In 2002, former Seoul Mayor Lee Myung-bak removed the concrete roads and recovered the waterway beneath — a mega project that became the nation’s first landmark urban renewal project. The project’s success contributed to Lee’s victory in the 2007 presidential election. To better attract visitors, the city has offered a variety of free exhibitions and events along the 12-kilometer-long trail. As of August last year, it attracted over 191 million visitors since opening.
(rene@heraldcorp.com) 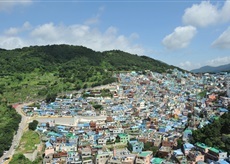 Gamcheon Culture Village, an amalgam of colorful buildings shaped like legos, is nestled atop a hill in Busan. The pastel-colored houses are clustered together, laid out on terraced land with a maze of narrow alleyways between them.

In the past, Gamcheon Village was a shoddy neighborhood that was a hub for Korean War refugees, and later for practitioners of the small Taeguk-do religion. Its high elevation made it an unattractive location for developers, allowing the area to maintain its original structures.

Today, the village is decorated with murals and sculptures, and old empty buildings transformed into exhibition spaces, winning a new name as “Korea’s Santorini on the South Sea.” With old public bath buildings, wells and steep steps intact, Gamcheon is cited as a prime example of renovation without destruction.
(hjwon@heraldcorp.com) 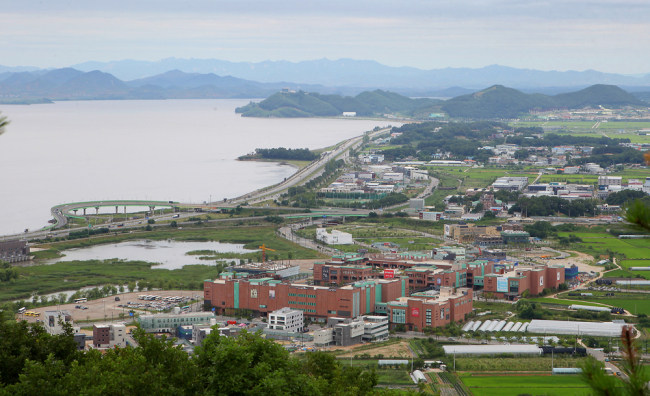 Paju Book City, 30 kilometers outside Seoul, has become a major tourist attraction as an island of companies and stores devoted to everything that has to do with books. Located in the border town of Paju, Gyeonggi Province, this giant cultural complex was created with government support through a “national industrialization development” grant.

In an effort to differentiate the complex as an artistic landmark, renowned architects Florian Beigel, Kim Jong-kyu and Kim Yong-joon created an “Architectural Guideline for Book City.” The result is a beautiful, flourishing area of publishing houses, cafes and stores offering bibliophiles everything they could hope for with regard to books.
(hjwon@heraldcorp.com) 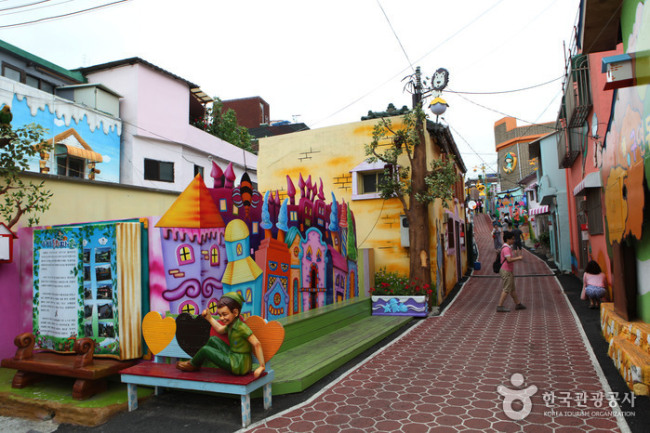 Songwol-dong in Incheon was originally a wealthy neighborhood, home to foreign merchants in the late 19th century, following the opening of Incheon Port. After the 1970s, the area began to wane with the regional economy collapsing and eventually became a neighborhood to be avoided.

In April 2013, Incheon City began a new project to revive the community and bring attention back to the abandoned neighborhood. In order to make urban regeneration possible without destroying the historic buildings, the standing structures on each street were carefully analyzed to accommodate colorful murals and art pieces without breaking them down.

Today, visitors will see how the dilapidated structures have been transformed to depict scenes and characters from classic tales, both Korean and Western. The brightly colored area stands next to Incheon’s historic Chinatown.
(hjwon@heraldcorp.com) 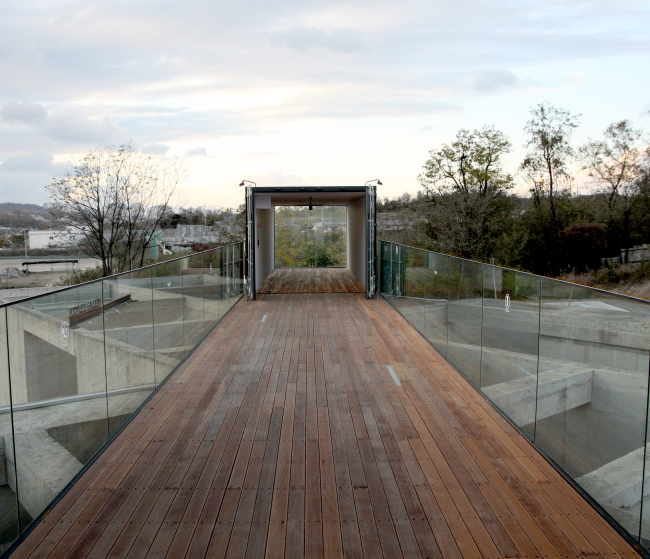 The owner of a 6,500-square-meter site in Hwaseong, Gyeonggi Province, initially sought to build a dry sauna in 2007. When the building framework was fully built, he suddenly suspended the work, citing lack of business feasibility.

Abandoned for years, the land became a local base for street gangsters. But in 2013, it was re-envisioned as an arts museum.

The architect remodeled the existing framework and added a few container boxes to it to create cultural spaces for exhibitions, flea markets and education courses.

Opened in April last year, Space of Design and Architecture has become an iconic sightseeing spot.

SoDA museum was awarded the second prize at the Good Place Award last year in recognition of innovatively creating cultural space for community residents in the suburban area.
(rene@heraldcorp.com) 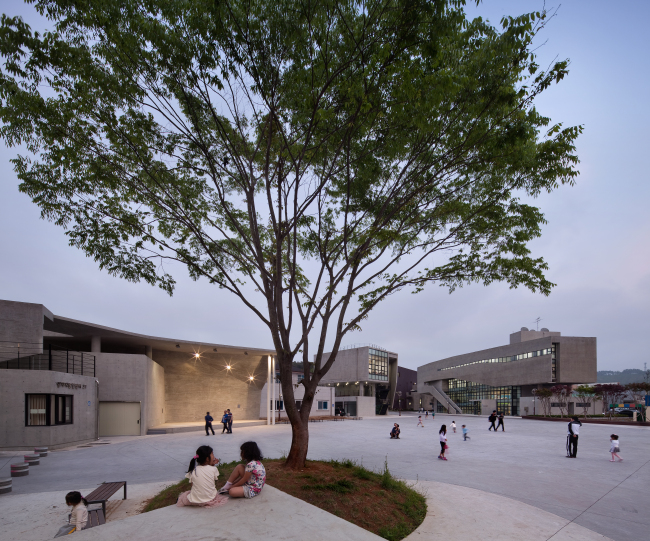 Village of Spring is the landmark public project that turned the former traditional marketplace to a rich community and cultural center. The modern plaza is surrounded by five concrete buildings without any particular entrances, offering open access for its residents and visitors.

The land was abandoned for many years after merchants left for a new marketplace in 2004. Supported by the Ministry of Culture, the county office transformed the wasteland into a public space where residents can mingle and gather. Five buildings offer various programs such as music lessons, sports classes and dance courses. In 2012, the village received the Korean Architecture Award in the public social sector category. The plaza also houses a museum for educational use for children in the neighborhood.
(rene@heraldcorp.com) 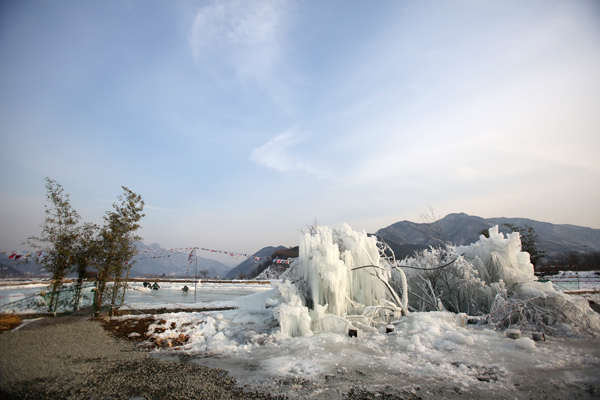 Unlike many other regeneration projects, the efforts in Changpo Traditional Village in Wanju, North Jeolla Province, do not aim necessarily to bring in people from other regions but rather focus on engaging the existing community.

Like many other agricultural towns, Changpo had faced economic hardships as younger people flocked to the city. To alleviate the situation, city officials have built community centers all around Wanju to share ideas. Changpo Traditional Village has a renewable energy center, an agricultural processing center, and a local food market to facilitate an increase in the efficiency and demand of local agricultural endeavors.

In addition, the village also boasts a “Dadeumi Granny Band,” a group of women who perform percussion-style acts using dadeumi, a traditional method of smoothing out wrinkles in fabric using wooden sticks — blending together traditions and culture.
(hjwon@heraldcorp.com)