Nuclear threats now more immediate, should not be underestimated: analysts

The North has already claimed to have the capability to miniaturize and diversify nuclear bombs, and the latest test appears to show progress in the North’s decades-long efforts to secure nuke capabilities, they noted, both in terms of quality and quantity. 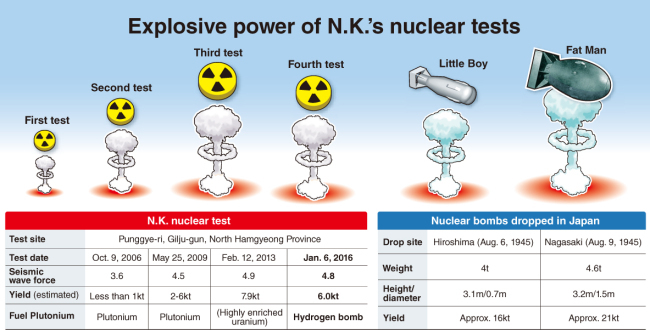 “North Korea should now be seen as a de facto nuclear power in terms of its nuclear stockpiles and overall capabilities, although the international community does not recognize it as such,” said Park Won-gon, security expert at Handong Global University.

“Most analysts are of the view that when a nation conducts nuclear tests four times, it is in the final stage of completing its nuclear armament technology development,” he added, noting that if the North is allowed to continue with its efforts, it will further advance its nuclear threats.

Pyongyang’s development of a hydrogen bomb was a foregone conclusion, experts said, noting the international community should make concerted efforts to cope with the threats.

Last month, North Korean leader Kim Jong-un first mentioned the development of a hydrogen bomb, though many observers here dismissed it as “bluffing.” Pyongyang has repeatedly said it would continue its push to strengthen “nuclear deterrence” against what it calls Washington’s hostile policy toward it.

“That is why analysts have long warned that the North would soon carry out a hydrogen bomb test.”
The North previously conducted nuclear tests in 2006, 2009 and 2013. Analysts had raised the possibility that should the North conduct another test, it would test a uranium-based bomb or a “boosted fission” bomb. The development of these “1.5-generation” nuclear bombs is a preliminary step toward the production of a hydrogen bomb.

Along with the North’s development of the explosive device, it has also come a long way in developing delivery vehicles such as long-range missiles through a series of rocket tests, disguised as satellite launches.

Since its 1998 test of the Taepodong-1 missile, the North has carried out five long-range rocket tests. Experts say the latest test in 2012 showed that it can get a missile to travel some 10,000 kilometers -- far enough to reach the U.S. mainland.

Apart from the land-based platform, the North has been pushing to develop an underwater nuclear-capable missile system. Last May, it claimed to have carried out an ejection test of a submarine-launched ballistic missile. It is also thought to have conducted SLBM tests in November and December.

Fears about the SLBM stem from the North’s potential “second-strike capability” to launch a sudden nuclear retaliation if it suffers a “first strike” from enemy forces.

The second-strike capability forms the basis of a condition referred to as “mutual assured destruction” that maintained the “balance of terror” between the U.S. and Soviet Union during the Cold War. SLBMs are at the core of the capability as submarines can launch targeted surprise attacks on enemy forces.

Last September, the North’s Atomic Energy Institute chief claimed that the North restarted all nuclear facilities, including its 5-megawatt reactor and uranium enrichment factory at its main Yongbyon nuclear complex.

The main 5-megawatt reactor is the North’s core facility to produce weapons-grade plutonium. The reactor, should it be fully operational, can produce 6 kilograms of plutonium each year -- enough to build one nuclear warhead, analysts say.

The North is believed to have accumulated some 40 kilograms of plutonium after it reprocessed spent fuel rods at least three times, in 2003, 2005 and 2009, according to Seoul officials.

Amid its efforts to produce plutonium-based bombs, the North has also been striving to advance its uranium enrichment program, reportedly since the mid-1980s.

The regime has claimed to have some 2,000 operational centrifuges capable of producing some 40 kilograms of highly enriched uranium each year. To produce one HEU bomb, more than 15 kilograms of HEU are required.

Pyongyang has pushed for its nuclear program in line with its so-called Byungjin policy of simultaneously developing its economy and nuclear arms. The North has already described itself as a nuclear power state in its constitution, a status that the U.S. and South Korea say can never be accepted.