President Park Geun-hye began talks with Chinese Premier Li Keqiang on Saturday ahead of a trilateral summit with Japan.

Park and Li are expected to discuss ways to further boost bilateral relations and exchange opinions on issues of mutual interest, including North Korea's nuclear weapons program, according to South Korean officials.

Li arrived in Seoul earlier in the day in his first trip to South Korea since 2013 when he took office.

Park and Li are set to meet with Japanese Prime Minister Shinzo Abe in a trilateral summit on Sunday, the first such meeting among the neighbors in more than three years. 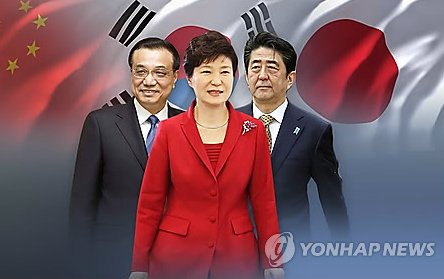 A trilateral summit has not been held since 2012 due to a territorial dispute between China and Japan, as well as Japan's attempts to whitewash its wartime atrocities and colonial occupation.

Japan ruled the Korean Peninsula as a colony from 1910-45 and controlled much of China in the early part of the 20th century.

On Monday, Park is set to hold talks with Abe -- the first bilateral summit between leaders of the two neighbors in more than three years. (Yonhap)