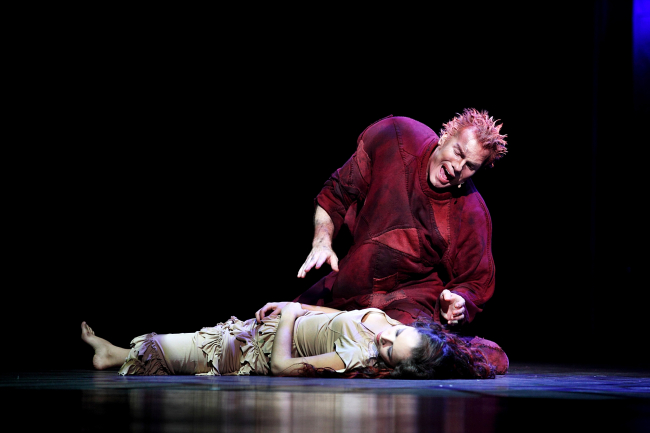 A scene from the orginal French cast musical production of, “Notre Dame de Paris,” running at the Blue Square theater in Seoul until Nov. 15. (Mast Entertainment)
Celebrating a decade since its first Korean premiere in 2005, the French cast of the famed novel-turned-musical, “Notre Dame de Paris,” has returned to Seoul, doling out unforgettably stellar performances of song, dance and even some acrobatics.

Not to be confused with the Disney remake, the musical production is based on the eponymous novel by Victor Hugo, with music by Riccardo Cocciante. Without delving too much into spoiler territory, the musical’s storyline is actually gritty and dark at its core – suffice to say there’s no Walt Disney fairytale ending in this version.

However, this tale of love and heartache is not just another clichéd love triangle tale; rather, it is more about the complex internal struggles of a love rectangle
Set in the backdrop of 1482 Paris, the musical follows the life of a young and irresistibly beautiful gypsy girl named Esmeralda. Her allure and charm captures the hearts of countless men, including the physically deformed hunchback Quasimodo -- who was harshly crowned as the ugliest man in all of Paris -- and the sinfully sly and soon-to-be-married Phoebus. The free-spirted Esmeralda even manages to conjure up forbidden lustful feelings from Frollo, the priest of the Notre-Dame cathedral.

The hit musical does not skip a beat as it is very action packed throughout, with an almost Cirque du Soleil-meets-musical feel -- from the uprising of Paris’ repressed citizens to the emotional struggles of each of the characters. And with virtually zero spoken dialogue, the musical is one medley after the next, featuring more than 50 songs in its two acts. 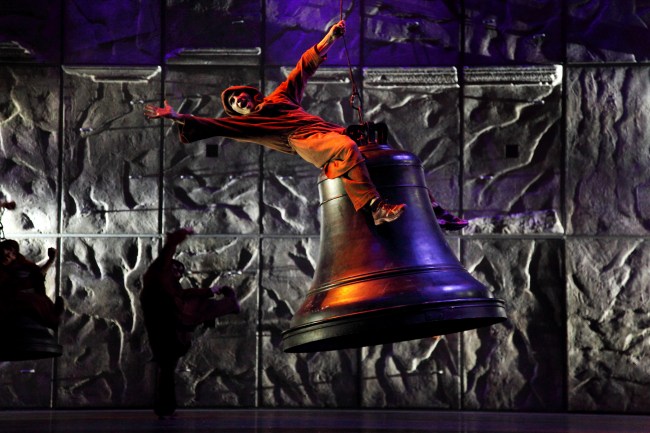 This year‘s Seoul return production features performances by cast members Matt Laurent as a haunting and broken-hearted Quasimodo; Robert Marien as Frollo the priest; Stephanie Bedard as Esmeralda; and John Eyzen as the cheating Phoebus.

To say the singing performances of the cast members were awe-inspiring would be an understatement. For theatergoers with any kind of exposure to local musical productions featuring K-pop idols desperately looking to penetrate the musical scene, the cast of “Notre Dame de Paris” puts them all to shame, with their singing chops on an incomparable level of emotionally bewitching. Thusly it came to no surprise that the show ended in roaring applause and a standing ovation from the audience.

In particular, the performance of “On Bright Morning You Danced” where Frollo professes his uncontrolled – and borderline violent – feelings of love for Esmeralda and lunges after her in heated lust, actor Marien’s confessional was so utterly compelling that many of the audience members gallantly cheered following the conclusion of the song -- despite the fact the scene was actually a grim portrayal of forbidden sin.

The on-going monthlong run of “Notre Dame de Paris” is being performed with its original French lyrics with Korean subtitles.

The musical is being staged daily at the Blue Square theater in Hannam-dong, Seoul until Nov. 15. Ticket prices range from 60,000 won to 160,000 won. For more information, visit www.mastent.co.kr.