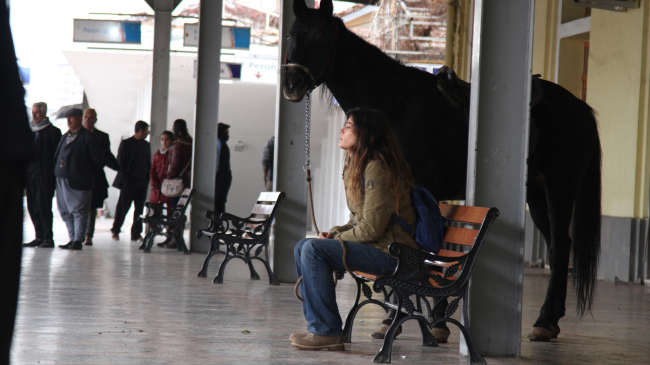 "Black Horse Memories" (BIFF)
While international movie stars -- from Britain’s Tilda Swinton to the United States’ Harvey Keitel – are likely to draw much of the attention in Busan in the coming days, one category of movies at the city’s popular film festival is looking to shift the spotlight to new talents from across Asia.

As the 20th Busan International Film Festival, which opened Thursday, sees 304 movies from 75 countries played on the big screen, the New Currents section is set to present eight films from 10 countries across Asia, exploring a diversity of themes. Each of the movies will have its world premiere at the festival, with the directors all debuting their first or second feature films.

One of the more ambitious attempts garnering great attention before the festival has been director Shahram Alidi’s “Black Horse Memories,” which was made in Turkish Kurdistan and premiered Friday.

In this corner of Turkey where the Kurdish language -- and seemingly the culture, too -- is forbidden, the movie follows characters who struggle to imbue the next generation with a sense of belonging by keeping the language alive. When one of the young characters meets her demise, her friends endeavor to return her body to her mother across many miles, a journey taken with her childhood horse.

“Black Horse Memories” has the strong art house vibe to be expected of a festival movie. The movie is awash with silent symbolism, featuring the thousand-year-old poetry of Omar Khayyam, while the audience mostly sees this world through the perspective of the titular black horse. The film goes on to explore the basic rights of a people to their culture, and the interplay of language and literature.

Director Yerlan Nurmukhambetov’s “Walnut Tree” affectionately portrays a community through a Kazakh couple’s wedding and, later, the birth of their child, both of which serve as occasions for the whole village to celebrate.

Though also upbeat in its tempo, Hari Viswanath’s “Radio Set” portrays a more complex mixture of emotions and circumstances. The film centers on an old man we see at first glued to his radio set, who seems to be indomitably cheerful and friendly. After his disdainful son crushes the radio set, the music moves in and out of the somewhat eccentric man’s head, leading others to question his sanity and viewers to ask if there is a connection between madness and happiness. The movie goes on to develop themes of familial duty and how we view our past -- whether we forget it to enjoy what we have now, or cling to it in appreciation.
Sure to be one of the surprise hits both of the category and the festival itself is Jihane Chouaib’s “Go Home,” a production from France, Switzerland, Belgium and Lebanon whose director was born in Beirut and raised in Mexico, set to premiere Monday. The movie fittingly starts with a scene that quickly moves between several different languages, as the main character, Nada, returns from France to her childhood home in Lebanon that she fled during a civil war years earlier. She has come to find out what happened to her grandfather, who disappeared in the war.

The film explores familiar territory in the idea “you can’t go home again,” but with added depth, as not only she has changed, but her connection to the language and culture is questioned and her presence is rejected by much of the community. As the narrative moves forward, flashbacks are interspersed showing the shifting quality, and sometimes fragility, of memory, as Nada wavers between pride and guilt and the audience question what “home” is.

Four other films, including two from Korea, a Japanese film and another from Iran, will be presented as part of the New Currents section at this year’s iteration of BIFF. Among the eight, two winning films will be chosen by a panel of film experts to each receive a $30,000 grand prize.

The Busan International Film Festival continues until Oct. 10. For more information and a timetable of the movies, visit www.biff.kr.