26 scholars share insight on future of Korea Inc. in ‘Time of Accumulation’ 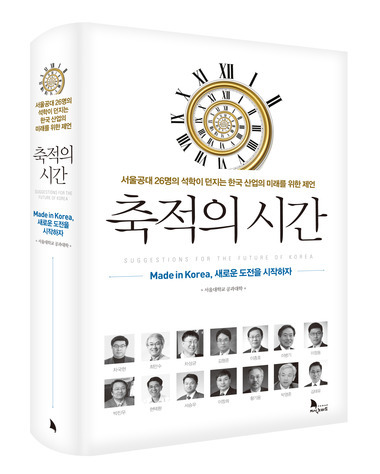 After five decades of high growth and the rags-to-riches transformation, Korea’s economy is finally slowing.

Although it might look quite natural to outsiders, particularly in this global era of the “new normal” -- slower but more sustainable growth -- the ongoing economic slowdown worries many in Korea to a great extent.

They fear Korea’s half-century stride toward prosperity may be coming to a full stop at the threshold of the much-coveted “advanced economy” status.

“Time of Accumulation” arrives on bookshelves amid this prevalent sentiment, with insights on the future of Korea Inc. drawn from 26 prominent scholars from Seoul National University.

Compiled by SNU professor Lee Jeong-dong, the book contains a series of in-depth interviews with “mentors” of key industrial sectors from display and automobiles to biotechnology.

While these mentors -- all professors at the prestigious university’s College of Engineering -- speak about their respective field of expertise, Lee, who led the interview-and-book project from 2013, attempts to extract common elements across industrial sectors and present to the readers a full picture of the broader economy.

“The competitiveness crisis that Korean industries are facing now is preordained,” writes Lee in his introduction to the 559-page book. “It is a wall that we must surmount in order to move forward.”

According to Lee, the problems confronting local industries share the same root cause -- the weakness in the “conceptual design” capacity. And that stems from fallacies inherent in the very growth model that lifted Korea out of poverty into prosperity at a pace unparalleled in world history.

Playing catch-up with advanced economies, Korea has taken a surefire shortcut to growth. It made the most out of the follower advantage, circumventing the mistakes made by first movers and concentrating time and resources on what’s proven workable. This strategy has made Korea a fast follower, allowing the economy to rise to No. 14 in national gross domestic product rankings. But a follower is a follower.

“The ability to create and present a fundamentally new concept, a new blueprint and a new market paradigm -- that’s what makes a game changer. ... That’s something that can’t be earned without accumulating one’s own lessons of trial and error,” Lee explains.

The book, which consists of two parts -- the introduction and overview written by Lee and excerpts of the interviews with scholars on specific industries -- asserts that there is no quick fix to the Korean economy. On the contrary, it tells readers that it will take time, hence the title “Time of Accumulation.” The only way to shorten the time is to embrace wholeheartedly the change of mode from a fast follower to an aspiring game changer and overcome the fear of failure deeply entrenched in Korean society.

The diagnosis and prescriptions presented in the book are far from new discoveries. Experts have said similar things before.

The book’s true message may be found in its unfaltering focus on the country’s backbone industries. All the talks of “conceptual design” and “creative accumulation” are, in essence, an attempt to find ways to upgrade industries where Korea has done a great job as a follower, like automobiles, smartphones, memory chips and ships.

Even as terms like “Gangnam Style,” “creative industries” and “hallyu exports” pop up alongside “the next drivers of economic growth,” what’s fueling the economic engine now is still overwhelmingly manufacturing, and that’s where, the book says, the future of Korea Inc. lies.