Hotelier rides for children from Busan to Seoul in charity cycling

Sutter rides his bike to work every morning from his home in Bangbae-dong in southern Seoul to the hotel in Sindorim-dong, southwest Seoul -- always trying to come in under 40 minutes in the 20-kilometer ride. He also rides his bike with his employees and hotel guests every Wednesday morning for 45 minutes.
He loves cycling so much that he asks his driver to take his bike back to his house, while he takes the subway after work so that the general manager can take that daily morning challenge again.

Cycling for Sutter is not only about staying physically in shape, but also it keeps him sharp in running the hotel. Sports and hotel management, he said, are “complementary” in his life.

“When you’re always on the computer, you need to keep moving and find excitement. When I get choppy and lazy I get frustrated with myself. Cycling gives me a sense of self-discipline,” said Sutter, 41, in an interview.

“I just love sports. I love to be outdoors -- the healthy environment, doing it with friends and families. It isn’t necessary about winning, and the game changes you.”

The former triathlonist, which Sutter used to do -- run, swim and cycle -- for about 15 years, is about to push himself further on his Swiss BMC bike cycling 560 kilometers from Busan to Seoul this week.

But this challenge will be for a good cause, rather than for competition. 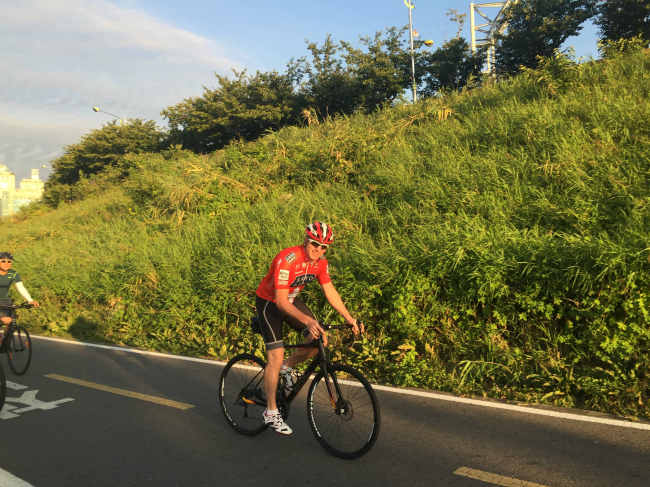 In partnership with UNICEF, Sutter will be cycling 150 kilometers a day -- or seven to eight hours a day making two stops in between -- with six others, including from the hotel and UNICEF to raise funds for children around the world.

“This is good for camaraderie, involving a mix of similar minded young guys,” Sutter said.

“Seoul-Busan cycling is nothing new. Everyone who is interested in cycling would consider it in their bucket list. I thought that would be good, and good training. As a foreigner, it’s also a good way to see places outside Seoul.”

People can pick their cyclists, and donate per kilometer via social media such as Facebook. All funds will be donated to UNICEF after participants finish the 560-kilometer charity cycling.

“It’ll be fun. It will keep us motivated because for every kilometer, it goes to UNICEF and the children, even though it will be challenging and risky,” the general manager said.

“Sometimes in life, if you keep asking what if, you better stay home and never go out again. Sometimes you have to take a little bit of calculated risks.”

The ride will start at Busan on Oct. 1, and all the participants are scheduled to arrive in Seoul on Oct. 4.