It is a versatile art that takes years of capital and hard work from a variety of people with great imagination. 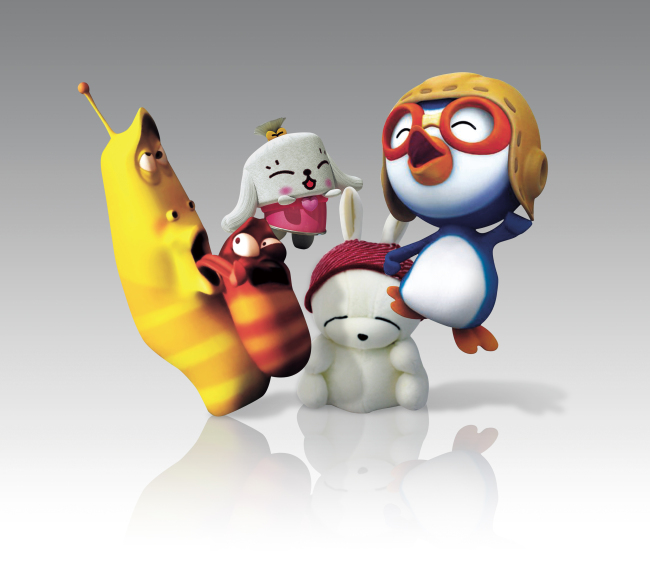 Drawing inspirations from the lives of ordinary people in an extraordinary situation and environment, animations and their characters can reach the hearts of many diverse people regardless of class, color or sex.

They can move you, make you laugh and cry, and make you escape to a fantasy world away from our daily reality for both adults and children, who long for romance and adventure.

They can heal your soul as seen from a hospitalized kid leaping for joy when seeing Batman. Children immediately stop crying and start smiling as soon as they see Pororo the Penguin with friends in a snowy adventure. Boys can’t get enough of Bernard Bear goofing off in normal situations. Girls want to become a beautiful princess like Elsa in “Frozen,” and fall in love with Prince Charming. Also, it has been said that actors study the lifelike facial expressions of “Larva” characters for acting.

From its pen and pencil days to digital, animations not only for entertainment but also for education have been able to garner -- in the words of Disney -- “mass appreciation.”

Like Hollywood enjoying its fair share of value in feature and TV series animations, Korea was also able to discover its niche in making and featuring short digital animations with story structures of less than 10 seconds mostly for television.

The field has shown great potential in creating value for the economy with the government setting up media start-up centers and schools like Korean Animation High School in Hanam, Gyeonggi Province, to foster next-generation storytellers.

“We try to expose our students to more than just what they can learn in the classroom by offering special lectures from artists, writers and producers who are working in the field,” said Choi Chang-soo, principal of Korean Animation High School.

But it seems that the Korean industry needs a new “creative injection” as it faces the limit in continuously creating slapstick comical animations with predictable action sequences and plots in a small market.

“Technology-wise, Korean animations are counted among the top in the world,” said Kim Won-gyu, director of the Korean Animation Producers Association.

“There has been criticism that Korean animations tend to veer toward a storyline that is too didactic, moralizing and uncreative, but recent animation films are veering away from that course.”

Experts say that the industry needs to “grow up” and gradually move on to making feature animations with real stories that can emotionally reach wider audiences.

“Young kids relate to characters, but as they grow up, they look at the stories of the characters,” said Han Chang-wan, president of the Animation Society of Korea.

This is why they move on to watch animations made in the U.S. or Japan.

However, discovering the next step in animation is expected to be a difficult process as observers said in order for the industry to mature, it would need tremendous amount of financial and human capital to develop a suitable and sustainable ecosystem. This will also require tearing down the walls between animation, licensing and merchandising industries.