Korean authorities on alert over possible impact on exports

The Japanese currency dropped below the psychological 900-won mark ― 899.67 won per 100 yen ― during prior trading of Thursday’s regular session. It marked the cheapest in 86 months since it posted 889.23 won on Feb. 28.

Though it gained slightly compared to the previous trading session to close at 903.04 won per 100 yen, its value has continued to fall over the past few weeks after trading between 920 won and 935 won in March. 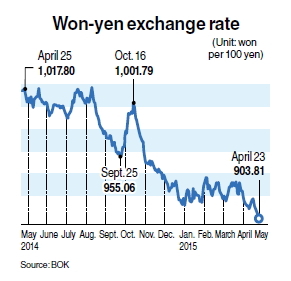 Korea’s monetary policymakers are expected to intervene in the currency market in a low-key manner to prevent the yen from further losing ground to the won, as too a strong position could dent local exporters’ price competiveness.

“The won could remain firmer (against the U.S. dollar) than the Japanese yen ... and its trend may continue until there are clear signs that the Fed’s rate hike would be in the offing,” said Chung Kyong-pal, analyst at KEB Futures Co.

The won’s sharp gain versus the Japanese currency came as the yen’s slide against the greenback has been sharper than the won’s descent on the back of Japanese Prime Minister Shinzo Abe’s campaign, dubbed Abenomics, to end years of deflation and listless growth through massive fiscal and monetary policy easing measures.

The recent rally of the Korean won was further accelerated as Asia’s fourth-largest economy logged a trade surplus for the 38th straight month in March and foreign investors bought a significant amount of local stocks.

In the first three months of the year, the country’s trade surplus stood at $21.6 billion. Korea’s trade account has been in the black since February 2012.

Foreign investors have also scooped up a net 3.4 trillion won worth of South Korean stocks this month alone, channeling more money into the economy, which in turn boosts demand for the local currency.

The won’s strong position is sounding an alarm bell among policymakers as the weakening of the Japanese currency comes at a time when South Korean exporters’ outbound shipments are losing steam.

The nation’s outbound shipment growth has decelerated for the fourth straight year as the global economic slump cut demand and weak oil prices lowered the export prices of key products.

According to data compiled by the Korea Investment Trade Association, the country’s exports increased 4.4 percent last year in terms of volume, well higher than the global average expansion of 3.1 percent.

Separate data compiled by the Bank of Korea also showed that the contribution of exports to South Korea’s economic growth fell to a five-year low last year as outbound shipments were hurt by a slower-than-expected global recovery.