He would not have minded a simple job, such as one carrying luggage. Even finding a job like that has proved to be a hard task, as most of the employers that he encountered were reluctant to hire him, even though he was able to communicate and work with others.

“There are limited workplaces I can apply for. Some have offered a job but the monthly wage they offered was less than 500,000 won ($463),” he said.

Despite the government’s efforts to improve employment rights and conditions, the disabled still face hurdles in entering the labor market as the nation marks its 35th annual Disabled Persons Day on Monday.

According to Korea Employment Agency for the Disabled, only 37 percent of 2.4 million disabled people aged 15 or older in the country were employed last year, which is 24 percent lower than Korea’s overall employment rate. This is also 7 percent lower than the average rate of other countries in the Organization for Economic Cooperation and Development in 2010. 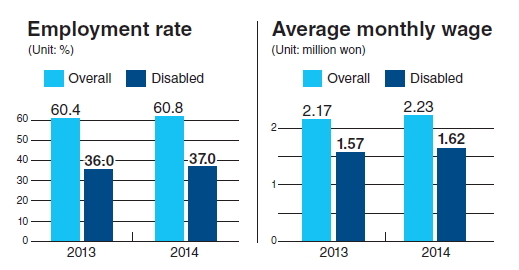 For disabled people, there are two options for seeking work: competing with in the regular recruiting market, or working at special workplaces designated as “sheltered employment facilities” set up for the disabled.

As part of the efforts to boost working opportunities for disabled people, the Ministry of Employment and Labor has mandated that public companies with over 50 employees fill at least 3 percent their positions with disabled workers. The quota for private companies is 2.7 percent.

If the company does not follow the quota mandate, it may face a fine of 600,000 won to 1 million won per disabled worker a month. The penalty is only charged to companies with more than 100 employees. The government is aiming to raise the quota to 3.4 percent for public companies and 3.1 percent for private companies, respectively, by 2019.

But the quota mandate, in reality, has limited impact. The larger the companies are, the more they tend to choose to pay the fine. 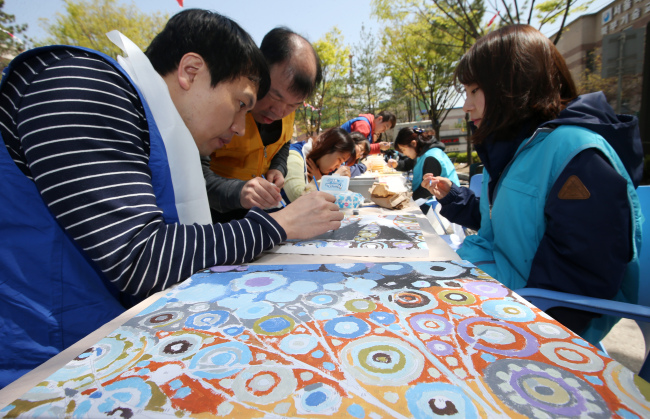 According to government data from last year, smaller companies showed a tendency to better meet the mandate. Companies with under 300 employees for instance, filled an average of 2.84 percent of their workforces with disabled people. On the other hand, the figure was just 1.97 percent for people with over 1,000 workers.

Of the top 30 largest companies in Korea, only nine, including five state-owned companies, met their obligations.

Conglomerates such as Samsung and LG paid over 13 billion won in fines last year.

“The lower quota fulfillment among the conglomerates suggests that money is not an issue to them. What really matters is probably the employers’ perception toward the workers with disabilities,” said occupational rehabilitation professor Na Woon-hwan at Daegu University.

“Many assume that people with disabilities will likely cause more safety accidents or not work well. But that’s just a misunderstanding.” 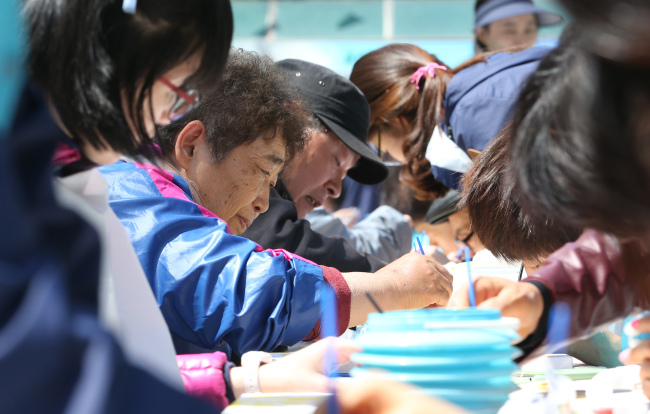 Dark side of special work opportunities

In a bid to offer better work opportunities and support job training for the disabled, the labor authorities have promoted the establishment of sheltered employment facilities, which provide jobs only for the disabled who are otherwise unable to get a job. The types of work vary but it is mostly concentrated on manufacturing.

As of this year, some 520 facilities have been established across the country, with about 140,000 people having been hired.

The sheltered employment facilities are only designated under certain conditions. More than 80 percent of the employees must be the severely disabled with their disability degree at over level 3. Job training programs must also be offered.

“This scheme does help the disabled get job opportunities, especially for those whose labor productivity cannot compete with the nondisabled in the general labor market,” said Kang Dong-ug, the social welfare professor at Korea National University of Welfare.

While the sheltered employment facilities provide rare job opportunities for the disabled, the work condition remains neglected, with the majority of them failing to guarantee their workers with the minimum wage.

Under the Minimum Wage Act, all employees are ensured with at least the minimum wage in return for providing their labor.

The government, however, has allowed an exception for those with “very limited working capacities due to mental or physical handicaps,” citing lower labor productivity.

As of last year, about 5,600 disabled employees at 482 workplaces were legally ruled out from getting the minimum wage, the authorities said. Of these workplaces, nearly 70 percent were those designated as sheltered employment facilities, mostly run by welfare institutions or social corporations.

Employers can pay lower wages after getting the waiver approval from the ministry. The government determines whether to allow the minimum wage waiver based on evaluations of the labor capacity of the disabled employees.

According to government data, the average hourly wage of disabled people was 57.1 percent of nondisabled wages, at 2,270 won.

“(The government) has viewed the minimum wage system from a market economy perspective and measured the labor productivity based on how much the workers can contribute to production,” a ministry official told The Korea Herald.

While disabled employees are getting paid less than the minimum, employers benefit from public subsidies in return for hiring disabled people. A monthly subsidy of about 500,000 won is provided for each disabled worker hired, depending on gender and disability level, officials said.

“The minimum wage waiver is being abused by more and more employers who want to save the labor cost and yet seek state subsidies,” said Lee Moon-hi, the deputy secretary general of civic group Korea Differently Abled Federation. KODAF is an association of all disabled rights groups in Korea.

In 2013, about 4,500 workplaces applied for the waiver, doubling in three years, officials added.

“Realistically, the disabled show lower work capacity but it is overlooked that their ability can be same as others depending on the type of work. Just having a physical or mental disabilities does not necessarily mean that their work capacity is (naturally) lower,” Lee added.

Among the OECD members, Korea is one of the three countries that do not guarantee the minimum wage for the disabled, along with New Zealand and some regions in Canada.

Last year, the United Nations Convention on the Rights of Persons with Disabilities recommended that the Korean government take appropriate measures to protect the disabled so that equal pay can be earned for equal types of work.

As public criticism grew over the waiver rule, the ministry vowed earlier this year to repeal it. Instead, the government said it would adopt a wage cut system which reduces the pay depending on the level of labor capacity.

The authorities would allow companies to cut the wage of the disabled depending on the level of their labor capacity. Those graded with over 90 percent will be guaranteed the full minimum pay while those under 90 percent will get pay reductions in steps. Those with under 70 percent will receive the set wage established by the government. The new scheme is to go into effect starting in 2017 with a concrete plan under discussion, officials added.

Experts, however, are skeptical of the new measure.

“I don’t see the difference in the new policy. The existing minimum wage waiver is already about cutting the wage,” professor Kang said. “Except how the ministry has set the lower limit of the wage, everything is same. There are still many loopholes that can be abused.”

Civic groups urged that the ministry should consider introducing a wage guarantee system in which the gap between the actual low pay and the legal minimum wage is supplemented by a public fund gathered for the disabled.

“A study has shown that this system would only need an extra cost of 8.9 billion won a year. This amount is manageable by public funding,” said Lee from KODAF.

The U.N. Convention also advised the Korean government to adopt the wage guarantee system to secure the living conditions of people with disabilities.

“The minimum wage problem is not just a labor issue anymore. It should be dealt from the welfare’s viewpoint. The minimum wage is now considered essential for protecting one’s individual’s human rights,” Kang said.

Experts underscored that the labor policy should be considered in conjunction with welfare measures.

“There is no such thing as a right answer for the disabled people’s wage system. The key question is whether the current system, including the labor measures and welfare benefits, secures disabled people’s human rights and dignity,” Na said.