The U.S. retail giant, which has had an exclusive partnership with Samsung Card for 15 years, is considering terminating its exclusive contract in May, according to news reports.

Spotting an opportunity, some other card companies were quick to establish a task force in a bid to get a share of the U.S. retailer’s 2.86 trillion won ($2.59 billion) revenue in Korea. 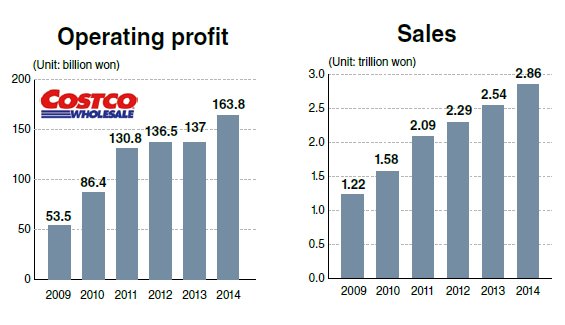 Hyundai Card, the country’s fourth-largest card issuer by market share, confirmed that it has created a team to prepare negotiations with Costco in case its contract with Samsung is not renewed.

“We are not sure of the chances, as there are other major players also vying for the exclusive partnership,” an official from Hyundai Card said, declining to be identified.

Unlike other foreign retailers operating in Korea, Costco has enjoyed a sharp increase in its sales among urban Koreans. Korea has been one of its most successful markets globally.

Currently, the wholesale club retailer only accepts Samsung Card or cash for settlement in its 11 stores in Korea.

The retailer’s Korean operation generated an operating profit of 163.8 billion won in fiscal 2014, up 19.5 percent from the previous year. It also yielded sales of 2.86 trillion won in the same period, with the Yangjae outlet generating one of the highest sales records among more than 600 Costco stores worldwide.

Samsung Card raised its service charge rate with Costco from 0.7 percent to 1.5-2 percent in 2012.

If Costco chooses to switch to another card issuer, it will be following in the footsteps of its U.S. and Canadian arms.

Earlier this month, Costco U.S. ended its 16-year relationship with American Express and partnered with Citigroup and Visa, while the Canadian unit dropped its Amex partnership in favor of one with MasterCard and Capital One six months ago.