Who are the oldest superrich in Korea?

The Superrich Team found six billionaires in South Korea who in their 90s.

The oldest living entrepreneur in Korea is KISWIRE founder and honorary chairman Hong Jong-ryul, who is 97 years old. Hong, born in 1918, has since stepped away from business management, but is still registered as a company executive. 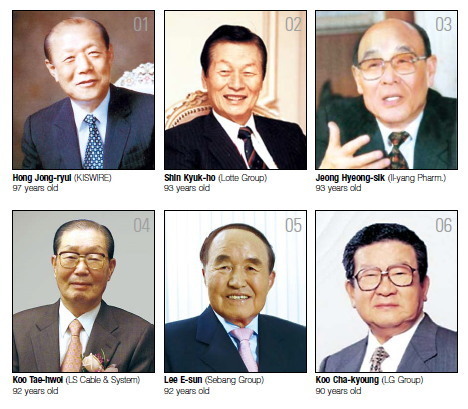 Shin keeps himself busy, despite his age. He is known to maintain his health by exercising regularly and recently surprised the public when there were talks of him moving into the Lotte World Tower in Jamsil, which is expected to finish construction next year.

Il-yang Pharmaceutical founder and honorary president Jeong Hyeong-sik is also 93 years old. After joining a Japanese pharmacy during the colonial era in 1938, Jeong founded Il-yang pharmacy in 1946 through a Hanseong Pharmaceutical Co. acquisition.

There is also LS Cable & System honorary chairman Koo Tae-hwoi, the only surviving sibling of the late LG Group founder Koo In-hwoi. Koo, who is 92, stated that he does not exercise much, but revealed that his secret to longevity was familial harmony. He is said to frequently hold family gatherings and emphasizes that family members treat each other with respect and good manners.

Sebang Group honorary chairman Lee E-sun is also 92 and is registered as an executive in Sebang and Sebang Battery. Lee set up Sebang Co. Ltd in 1965 and developed it into Sebang Group, which holds 12 affiliated companies. He also established a non-profit organization called “Gacheon Foundation” in 2007.

LG Group honorary chairman Koo Cha-kyoung is 90 years old this year, but he retired from business management in 1995 at the age of 70.

He has instead been in charge of education for both LG Yonam Foundation and LG Welfare Foundation.

He made use of his former career for the post-management role, as he was an elementary school teacher for five years before joining LG Group’s business management. Koo is currently said to be enjoying his later years at a farm in Cheonan, South Chungcheong Province.