The 31-year-old, who rarely dreams, could vividly recall what was disturbing her.

“Someone was pulling my teeth out,” she said.

Feeling leery, she grabbed her smartphone to search online for clues about what the dream meant. 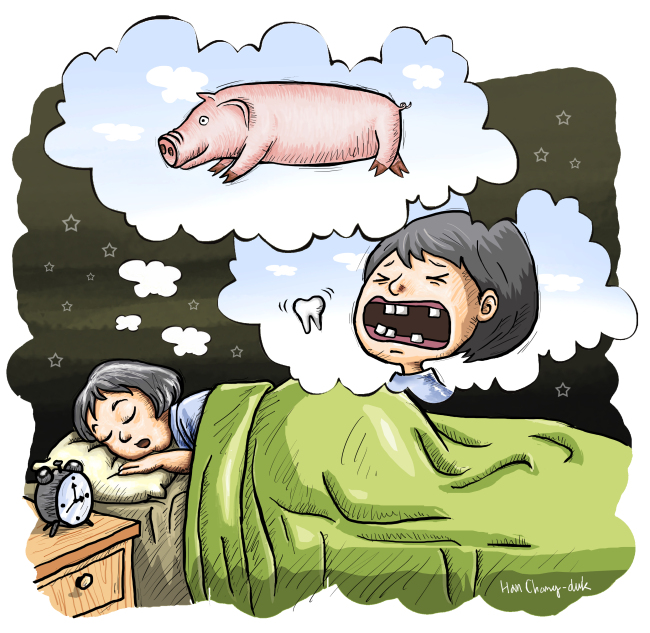 Immediately, a portal site pulled up a long list of dream-interpreting websites and Q&A pages filled with answers.

“Everyone said losing teeth was a bad omen,” said Lee. “I don’t trust dream interpretation 100 percent, but there is that uncomfortable feeling about it.”

For many Koreans, dreams mean something. They are not all Freudian or Jungian believers ― who think dreams reveal people’s unconscious minds ― but the majority accept that dreams contain some kind of wisdom or prophecy.

Buying lottery tickets is a common reaction to a dream about a pig. Star athletes often cite their victories as having good omens in their dreams before major competitions ― usually pigs, dragons or maybe excrement. It is not rare for actors to say they had a lucky dream before shooting their most recent film.

“Dreams express unconscious desires and conflict,” said Lee Joon-ho, professor of psychoanalysis at Hanshin University Graduate School of Psychoanalysis. “But to understand how Koreans perceive dreams, it is important to understand in the context of culture and tradition.”

Deeply rooted shamanism and centuries-old customs play a large role behind Korea’s emphasis on dreams and their interpretations, experts say.

That is why even in the 21st century, many people ― even scholars and scientists ― talk about dream interpretations and are influenced by superstitions.

“It’s a cultural difference,” said Yoo Hwa-jung, a practicing fortune teller and a dream reader, who has published seven books about dream interpretations.

He offers the theory of yin and yang, which literally means shadow and light, to explain Asians’ love of dreams.

“Dreams are viewed as a yin-natured thing,” said Yoo. “That is why yin-minded Asians focus more on the spiritual elements, while yang-minded Westerners are keen on logic and things that are realistic.”

“Everyone dreams during sleep, but it’s a matter of what each person pays attention to,” said Yoo. “It’s the custom.”

Pig dreams are interpreted as being extremely fortunate, as pigs symbolize wealth and fortune.

Pigs’ association with money originates from the high fecundity of pigs. Moreover, the pig’s Chinese character is pronounced as “don,” which also means money in Korean.

Pigs have been regarded as sacred since ancient times. For this reason, a boiled pig’s head still takes center stage during the “jesa,” an ancestral ritual, or “gosa,” a traditional ritual held when people move to a new house, or start a business or even begin shooting for a movie.

But be careful of what the pigs are doing in the dream. Generally, a pig has to come closer to a person, not go further away, in order to be considered lucky. The best omen is when the dreamer is embracing a pig.

Other animals considered lucky are dragons, snakes, carp and phoenixes.

So what should you do after a good dream?

“It’s definitely a ‘go’ sign if you were worried about doing something,” said Yoo. “For instance, if you are debating whether to invest or not in a new company, just do it.”

Another option is to sell the dream if you think someone else needs the luck. In that case, you can sell your dream and receive anything in return, usually money.

“As far as I am aware, the dream-selling custom is only practiced in Korea,” said professor Lee. “I think it’s a very interesting, unique phenomenon.”

Losing teeth is the most common form of a bad dream, as it symbolizes losing something or someone important, including friends and family. It can mean a range of things, from illness to a job loss, a departure and, in the worst case, death.

For example, when a person loses a tooth, it generally means someone very close ― usually family ― will get ill or die. If it is the upper teeth, an older family member will die, while the lower teeth symbolize younger family members.

Losing other parts of the body, including hair, nails and eyebrows, are also considered a bad omen.

“Bad dreams tend to go against the norm,” said Yoo. “For instance, a mountain is good to hike up, but if you are hiking down, it is not a good sign. If you missed a car ride when you were planning to take one, it is unlucky. Muddy water ― instead of clear water ― is also a bad omen.”

Dream interpreters advise people who wake up from a bad luck dream to be careful of their surroundings.

Koreans believe that a woman or family members close to her will have a conception dream for each child before it is born.

While this belief originates from China and is found in some other Asian countries, including Japan, Vietnam and India, Korean people still take this idea pretty seriously.

A 35-year-old mother identified by her surname Park said it was her mother-in-law who dreamed of a big basket filled with strawberries before she had her daughter few years ago.

So how should one tell apart a conception dream from regular dreams?

Dream tellers say that conception dreams deal with certain subjects. For boys, the subjects usually have “masculine” characteristics, such as tigers, cows, snakes, pigs and dragons. Dreams of nature such as rain, sun or the ocean also symbolize a baby boy.

If you want a baby girl, dream something beautiful and small. It is usually fruit, jewelry and small creatures like goldfish.

Also, there is a common belief that the dream tends to feel rather intense.

Conception dreams usually remain stuck in the memory for a longer period of time than other dreams.

The vivid image, in terms of clarity and color, makes the dream stand out from other dreams.

“People come to see us to know whether their dreams mean something,” said Yoo. “We tell them the interpretation, but it’s always the person’s choice to listen or not.”