According to the founders of Over the Dish, a Seoul-based restaurant curator, success in the industry is all about location and a competitive edge in theme selection.

“It seems like a fad ― from the high-end Galleria Department Store in southern Seoul with Gourmet 494 to the rather affordable and hearty Food Empire at IFC Mall in Yeouido, the select collections of popular diners seem everywhere. But this is the time you should be more careful in location and theme selection because this is the point where you can either stand out or not,” Sean Sohn, founder of Over the Dish, told The Korea Herald. 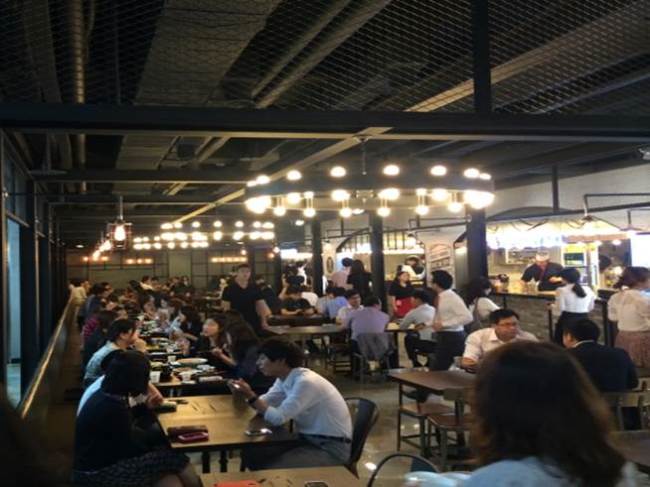 Over the Dish is a relative newcomer ― its first outlet near Konkuk University in eastern Seoul opened in July 2014, and it now has two more outlets, in the city’s Hongdae and Jeong-dong areas.

But the company is taking the industry by storm. Led by Sohn and his business partner Sagong Hoon, the three outlets, each housing about 10 popular restaurants, has been generating monthly revenue of 1.3 billion won ($1.17 million). The two are planning to open some more by the end of the year including the upcoming Gangnam Station area. They are also considering going global, reinterpreting the Korean Wave, through food.

Sohn said the main reason behind Over the Dish’s instant success was the competitive rents, allowed by careful selection of location.

“We receive far less than the conventional 20 percent of the sales from each restaurant as rent, which is far lower than many other select dining locations in the market. This was made possible because we have decided to look for undiscovered locations instead of going after coveted spots that require higher rents,” Sohn said.

For instance, the company’s first outlet, inside the Kondae Star City Mall, was regarded as “dead space” because there was no traffic except for moviegoers visiting a nearby cinema. Even for those who visited the cinema, the area wasn’t particularly visible. The second outlet, in Jeong-dong Baejae Building in central Seoul, was once used as parking lot and a small exhibition hall for a school foundation because of a lack of foot traffic in the area.

“We had to expand the entrance, make the signboard noticeable to people even from far away. We even handed out the leaflets on our own,” Sohn said.

Finding a good theme was also important. The first three restaurants mainly focused on the rather casual dishes popular in Hongdae and northern Seoul. Sohn, who already had experience in restaurant curation ― he oversaw the selection of restaurants in the Twin Tower arcade and several more ― had to persuade rather reserved restaurateurs to join his venture.

Now, after witnessing the success of Over the Dish, more diners are willing to join, Sohn says.

But in the future, stores will be carved out in more detail.

“We are planning to curate restaurants in the exotic district of Itaewon in Seoul, in the far southern city of Busan and more. If we do not try to come up with new things, we will probably be out of the market soon,” Sohn said.

“Why not curate New York’s best burgers and pizzas here? Why not go for the best pastas in Europe? With reasonable locations and good themes I am sure that is possible,” Sohn said.