In today’s globalized economy, digital technology, individualized culture and data-driven design that allows monitoring of the masses often put human freedom at risk, according to Koolhaas.

Using the advancement of digital technology as a cautionary tale, the leading architect and designer said that society should be careful about turning it into a surveillance system, in which we sacrifice our freedoms and basic human rights for the sake of comfort.

“Monitored by devices that analyze every movement and inform us of the results. To what extent are we embracing digital technology in design?” he asked. “Because it engages in the everyday lives of citizens and changes the nature of driving and design.” 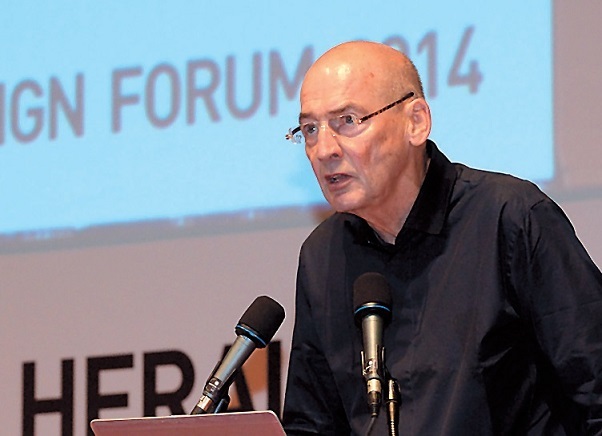 During the lecture, the architect also spoke about some of his well-known projects in the past. He brought up the “barcode” flag for the European Union, which he designed after Commission President Romano Prodi asked him to find a way of rebranding Europe for its diversity and unity. The proposed flag, introduced in 2002, displays the colors of every European flag as vertical stripes, the architect explained.

Born in 1944 in Rotterdam, Netherlands, Koolhaas is one of the most celebrated contemporary architects.

He is also famous for his collaboration with designer label Prada, and designing its stores in Beverly Hills and on Broadway in New York.

“Fashion is a very interesting territory for the reason that in architecture, decisions and efforts and realizations take incredibly long ― at least two or three or four years, typically,” he said during the lecture.

“The beauty of fashion of course is that revolutions are made overnight.”

This year, Koolhaas served as the director of the Venice Biennale’s 14th International Architecture Exhibition. One of the themes of the event was to critically look at the minute details and history behind each piece of architecture.

“We looked at each element of architecture, the ceiling, wall, staircase, and looked at the evolution of the elements over the past 3,000 years,” he explained. “How the ceiling in 1710, which was ornamental, which depicted religion, changed into a totally utilitarian one that describes modern lives.”

During this year’s edition of Venice Biennale, the architect also noticed there was a discontinuity from tradition in every modern history of the 66 participating countries over the last 100 years.

In terms of the architectural history of South Korea, he said the country’s history of political turmoil and abrupt modernization was one of the greatest influences in shaping its modern structural “integrity.”

“Every country was destroyed once, conquered once, rebuilt once and destroyed again,” he said. “ ... discontinuity is the essence of the 21st century ... there is no other way but to take the best out of it and to integrate it in your thinking.”

The architect also said the architecture profession is ever evolving in today’s market economy.

Architects in the public sector ― such as those who work in social housing, urban planning and infrastructure ― are often forced to leave the field, even if they wish to stay, as more opportunities arise in the private sector, he said.

“Because you have to ask yourself if an architect is working for Gucci or doing furniture for Cartel, and thinking about issues in the united Arab world … can you still be great in the traditional sense of the word (of an architect)?” he said.

“We are not simply dealing with issues which are traditional or classical as they were 50 or 60 years ago. So I think the profession is changing and therefore the reputation you convey on the profession in its current form by definition has to change, too.”

For aspiring designers, Koolhaas said it was important to be experimental, and encouraged them to think beyond architecture.

After Koolhaas’ lecture, architect Joon Paik, who is the vice president of Chang-jo Architects, gave a speech about the challenges he faces as an architect, especially when it is necessary to compromise his artistic visions in order to meet his clients’ needs ― and how to find a balance between them.

The architect, who holds a master’s degree in architecture from Harvard University, is best known for designing Spaceport America, the world’s first commercial spaceport, in New Mexico.

The historic project is funded by Richard Branson, the chairman of Virgin Group.

Paik said it was important for him to match the terminal to the shape of the mountains so it blends in with its natural surroundings in New Mexico.

The architect said an aspiring architect needs more than just talent and an exceptional sense of design to succeed in the field.

“I think it’s the things that they don’t teach you at school ― the people skills,” he said.

“You have to be able to persuade others so they can agree with you (on your ideas).”