“Modern art has no boundaries. If you can think it, you can make it happen,” he said. “Everyone is born an artist. I just continued to be an artist, making art my life’s work.”

The 40-year-old artist was delivering a special lecture during the Herald Design Forum 2014 that was held at Seoul’s Dongdaemun Design Plaza.

A former “street boy” who enjoyed spraying graffiti on the walls, Riggs is now considered one of the leading artists of his generation. 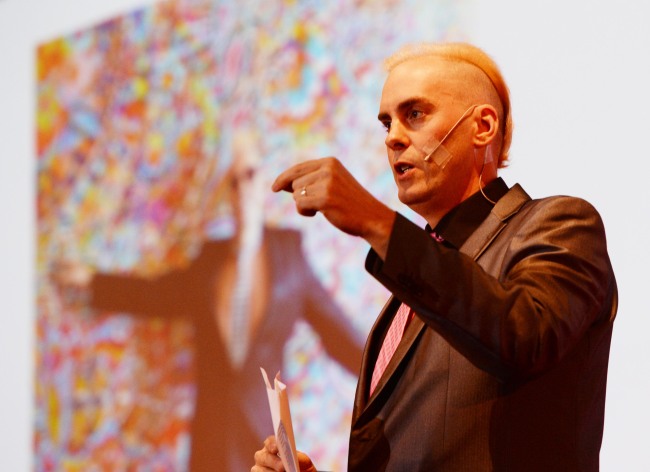 "Chris Riggs. ( Park Hyun-koo /The Korea Herald)
“I didn’t understand why painting on the walls was illegal while those drawn thousands years ago were considered national treasures,” he said. “We did it anyway and now street art has become a form of art.”

His artworks, a unique combination of cubism, abstract, surrealism, minimalist, pop and street art, are currently owned by international museums, galleries and collectors in some 50 countries.

His most famous work may be the Dunny, a black doll with a round head, arms, legs and torso with the word “love” all over this body in pink, orange and yellow. One of the pieces was sold for a record $50,000 recently.

“We are all kids at heart and have played with toys during our childhood. Remembering those warm moments playing with toys as a kid evokes positive emotions,” he said.

In order to make positive changes in our society, Riggs suggested that not just aspiring artists but also all the adults become a rebel in their daily lives, who he called a true artist.

One of his recent rebellious activities is hanging up the “Chris Riggs for Mayor” posters on the walls and poles all over New York and Miami.

“Only politicians are allowed to hang up their names all over the city but artists can be arrested. That seems unfair to me,” he said.

“Art is about new ideas and free thinking beyond the boundaries set by society. Our job is to come up with new ideas that make our world better.”

Riggs, who has created artworks based on a single theme ― love and peace ― does not hesitate to openly voice concerns about social issues such as war, poverty, food safety.

“We must change the way we take our planet for granted and learn to respect all these gifts that nature gives us,” he said. “One great design idea can save the planet. The idea of peace can save us all.”

Riggs was born in New York in 1973. He studied painting and political science at City College of New York. He executes his political city-based paintings and sculptures in acrylic and spray paint. He now lives and works in Miami and New York.