By Lee Woo-young
Published : Nov 23, 2014 - 21:41       Updated : Nov 25, 2014 - 11:15
The fourth edition of the Herald Design Forum is bringing together the world’s most prominent designers and industry experts in Seoul to discuss innovations driven by design thinking.

Gurus in architecture, product design, fashion, urban design and art toys will give lectures and lead discussions between industry experts and Korean audiences.

Here are brief introductions of the key speakers at the 2014 Herald Design Forum, to be held at the Dongdaemun Design Plaza in Seoul on Nov. 26. 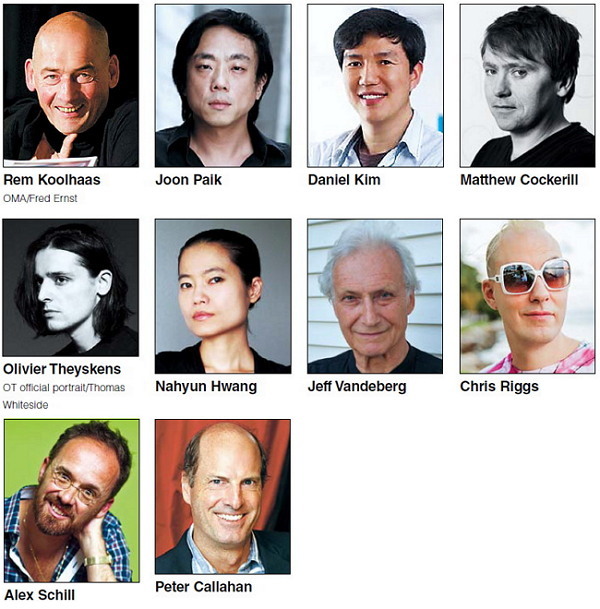 Rem Koolhaas: Koolhaas, founder of the architecture firm OMA, is one of the world’s most influential architects. He has led many projects, including large-scale buildings that add unique features to a cityscape. His recent works include the CCTV Headquarters in Beijing, Beijing Television Cultural Center, Seattle Central Library and Embassy of the Netherlands, Berlin. He was a curator of the 2014 Venice Architecture Biennale, which focused on fundamental elements of architecture and introduced the unique aspects of various countries’ modern architecture. He is currently a professor of Harvard University.

Joon Paik: The vice president of Chang-Jo Architects, Paik is well known for having designed Spaceport America, the world’s first commercial spaceport, in New Mexico. His recent projects include the exclusive showroom for the BMW 7 Series Mobility Lounge. He worked at the design office of world-renowned architect Renzo Piano. He is also a member of the Royal Institute of British Architects.

Daniel Kim: The Asia partner of Daylight Design, a San Francisco-based innovation and design consultancy, Kim has experience drawing up innovation strategies for companies based in the Asia-Pacific region including P&G, AmorePacific and Samsung. He started his career at IDEO, the cradle of “design thinking,” moved on to work for online game developer Nexon America and then joined his former IDEO colleagues at the Daylight Design to oversee projects based in Asia.

Matthew Cockerill: Associate design director at Seymourpowell, Cockerill has helped companies strengthen their relationship with customers and improve their products so that they satisfy consumers’ needs and desires. He worked in South Korea for several years, starting in 2003, managing projects for Samsung Electronics. He is also well known for having designed first-class airline seats.

Olivier Theyskens: Theyskens, a Belgian fashion designer, has led the world’s top fashion brands, including Rochas, Nina Ricci and Theory. Theyskens debuted as fashion designer with his eponymous brand Olivier Theyskens, which he ran from 1997 to 2001. His creations have been praised for their relevance to younger people. His fresh take on fashion continued when he moved to Nina Ricci in 2006 and to Theory in 2011 as creative director

Jeff Vandeberg: The CEO of Vandeberg Architect, Vandeberg has led many city renewal projects in New York, including the relocation of New York City’s Flower Markets and Essex Market, the St. John’s Terminal conversion, the redesign of the Roosevelt Island SkyTram station and more. He also taught at Pratt Institute in the 1980s.

Chris Riggs: The York-based artist Chris Riggs has combined features of cubism, surrealism, minimalism, pop art and street art in his unique works. He has become well known for his art toys, including the popular character Dunny, a black doll with a round head, arms, legs and torso with the word “love” all over his body in pink, orange and yellow.

Peter Callahan: The owner and creative director of Peter Callahan Catering, Callahan has been a prominent caterer, food stylist and culinary innovator for more than 25 years. He has organized party events for figures including U.S. President Barack Obama, Martha Stewart, Vera Wang, Kate Spade and Tory Burch. He is also a founding chef of the U.S. State Department Chef Corps program, which brings together diplomacy and the country’s top chefs.