Tesco may exit from Korea: sources

“It seems like employees are talking about the possibility of Tesco exiting from the country,” a corporate insider at Homeplus told The Korea Herald.

Homeplus is the nation’s second-largest discount chain. Its CEO Do Sung-hwan, who took office in May last year, and a number of other high-ranking officials are facing a prosecutorial investigation into their involvement in allegedly selling the personal information of more than 5 million customers over the past few years.

“Employee morale has hit rock bottom since the scandal was made public,” the insider said.

In addition to the data leak, Homeplus has been suffering from declining profit.

Analysts are currently forecasting that the operating profit of Homeplus will fall to its lowest level in three years this year. 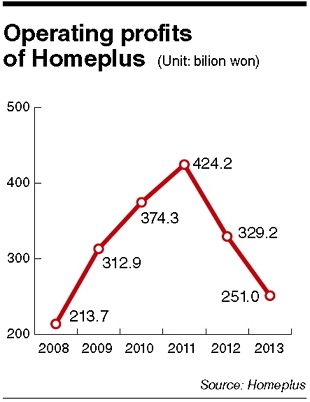 “The business conditions of supermarket chains in Korea will continue to worsen due to severe market saturation and regulations on opening new branches,” said Yeo Young-sang, a stock analyst from Hana Daetoo Securities.

The situation at Tesco’s U.K. headquarters has also not been too rosy.

Recent data from market researcher Kantar Worldpanel showed that sales at Britain’s largest grocer fell 4 percent on-year in the months of June, July and August, with its market share dipping from 30.2 to 28.8 percent.

To help put Tesco back on track, the corporate board has hired a turnaround specialist ― Dave Lewis ― as the new CEO, even though the former Unilever executive has no experience in the retail sector.

Industry watchers say the new Tesco chief has been commissioned with reviewing the business of Tesco’s international arms, including Homeplus, and could restructure them in a drastic manner to rescue the company.

He may visit Korea for the first time this week to inspect the Homeplus operations, according to media reports on Tuesday. Company officials, however, denied the reports, saying that they have not heard of an imminent visit.

Homeplus is the only outlet Tesco runs in Northeast Asia. The grocer pulled out its business from Japan two years ago and decided to exit from China due to poor performance.