Luhan submitted the legal documents to the Seoul Central District Court allegedly to partially nullify the exclusive contract that he had signed on entering the country’s largest entertainment agency by market capitalization.

Although the specific cause of the lawsuit was not publicly revealed, he is expected to wage a legal battle similar to that of former EXO leader Kris. Kris, too, sued S.M. on May 15 to end his exclusive contract, citing exploitation of basic human rights. 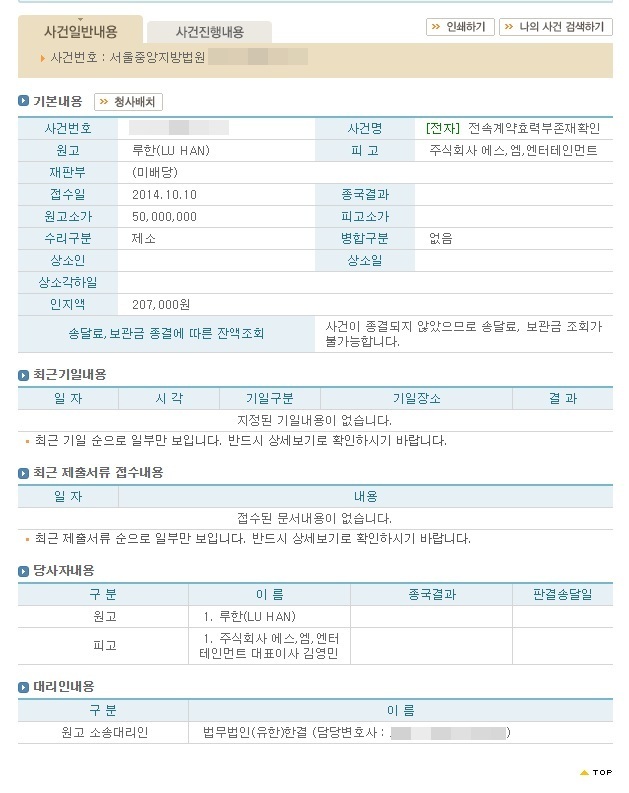 Prior to the court filing, Luhan has been mostly absent from the entertainment scene, citing health issues. The singer also excused himself from EXO’s first exclusive concert in Bangkok, Thailand, Sept. 13 through 14, allegedly due to a headache.

After Luhan’s case was reported, S.M. Entertainment could not be reached. In recent years, the abuse controversy involving K-pop stars and their agencies has gained public attention, with a series of legal actions by globally popular singers. The three former members of TVXQ, now JYJ, Hankyung of Super Junior and Kris of EXO have taken legal action against S.M. Entertainment.

Hankyung, a Chinese member of boy band Super Junior, sued SM in late 2009, claiming that his contract with the agency was unfair. In mid-2009, three former members of TVXQ -- Jaejoong, Yoochun and Junsu -- also filed an injunction to undo their exclusive contract with S.M.

The latest dispute of similar nature was brought up in another star label, Star Empire Entertainment Co., by ZE:A leader Moon Joon-young. Moon, however, revoked his manifesto after he had “an all-night candid talk with CEO Shin Ju-hak.”

These boy band members resented the common issues of the agencies’ maltreatment, hectic work schedules and unfair distribution of profit.