Instead, it should be a little more aggressive by seeking riskier assets overseas to secure “medium returns, if not high returns,” through investment diversification, he said. Otherwise, the country’s pension fund will soon run dry up for people who are depending on it after retirement.

“It is time for the NPS to move on to investing in assets with medium risks and medium returns. If it continues its investment strategy of low risks, low returns, it may accelerate the depletion of the pension fund,” said Cho Sung-il, a finance professor at Chung-Ang University, told The Korea Herald.

“More investments should be made in overseas markets.”

Cho added that being excessively risk-averse would only aggravate the situation in Korea, which is facing a rapidly aging society, a lack of welfare finances and increasing social disparity.

He suggested that the fund should diversify by investing more in hedge funds, infrastructure and real estate for higher returns.

“Investment in emerging markets, for instance, can buffer (domestic losses) if the Korean economy enters a low-growth phase,” the economist said.

Currently, around 80 percent of the NPS’ investments are made in the domestic market.

The Korean pension fund had the lowest returns, with 4.2 percent, among 11 global state funds last year, while Norway topped the list with returns of 15.9 percent. 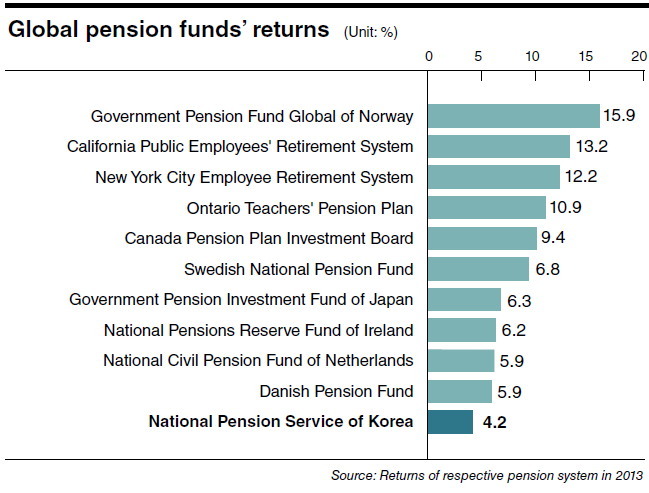 The fund’s safe investment strategy only worked before the 1997 Asian financial crisis, when the nation’s key rate stood at around 15 percent. Bonds then offered higher yields than stocks or any other assets.

Also, during the global economic crisis in 2008, when most advanced markets’ funds had negative returns due to investments in risky assets, Korea’s pension had stable returns.

However, with the continuing economic slowdown and the low interest rate in Korea, concerns have been raised over the fund’s unchanged investment strategy.

The NPS has only two overseas branches, in New York and London, where there are only about five employees overloaded with administration and support duties.

He added that the position of chief investment officer with the NPS lacks job security, independence and authority, despite the gravity of the post.

Currently, the CIO is limited to a three-year term, which makes CIOs more risk averse and inclined to set short-term goals.

“It is necessary to extend the CIO tenure so that they can set a long-term investment plan and can have more independence, and to vest authority in CIOs (to carry out) hiring and setting the budget,” he said.