Ten years from now, technological innovation will reach a level of personalization that will transform every moment of our lives.

It is not as if there will be a new range of innovations that will impact our future, or more precisely, that of our children. In fact, many of today’s existing technologies are relevant to this particular vision of the future, and will not only become more powerful, but also more integrated with one other.

With improved computing systems and communication networks, the world will go through another revolution, bigger than that brought by the opening up of the Internet in the early 1990’s.

If what the experts say is true, then we can look forward to either the “Second Machine Age” or the “Third Industrial Revolution.” 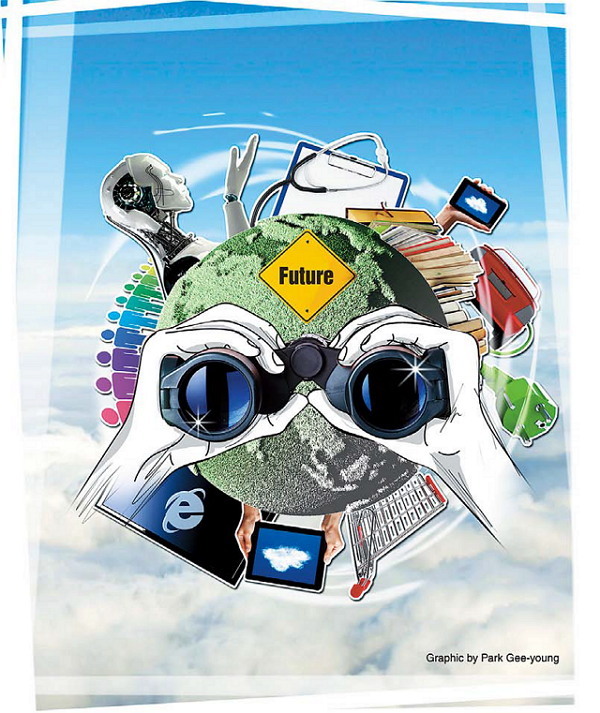 As the authors note: “Machines, in the shape of robots and computers, are about to take over most of the profound impacts on our society and economy.” In their book, they reveal the forces driving the reinvention of our lives and our economy.

“As the full impact of digital technologies is felt, we will realize immense bounty in the form of dazzling personal technology, advanced infrastructure, and near-boundless access to the cultural items that enrich our lives.”

Another academic study that has raised eyebrows is the “Third Industrial Revolution,” by Jeremy Rifkin, president of the TIR Consulting Group. He explores how Internet technology and renewable energy are merging to create a powerful revolution. He asks us to imagine hundreds of millions of people producing their own green energy in their homes, offices, and factories, and sharing it with each other in an “energy internet, just like we now create and share information online.”

There is no doubt that with the advancement of technologies ranging from communications, computers, artificial intelligence and bio-engineering, technologies will have an immense impact on our lives, as they usher in a new era.

This special feature section in this edition of The Korea Herald, tries to give you the answers.

Scholarly articles by top scientists and engineers from KAIST (Korea Advanced Institute of Science and Technology), untangle the web for you.

KAIST was established in 1971 to model a research focused university and to foster elite human resources in science and technology. It has become a well-respected member of the worldwide science community, and is renowned for its academic excellence.

Articles included in the feature section focus on a wide range of scientific activity.

Nuclear and quantum engineering professor Rim Chun-taek gives us an overview of electric cars. As he notes, our road system itself is optimized only for construction. However, the times call for a smart road system that incorporates IT technology to enable driverless driving, wireless charging and safer driving.

The biggest advantage of smart roads is that since they do not require land purchases, the construction budget will be greatly reduced.

“The car of the future will be based on IT. I hope that with wireless electric cars, South Korea will become a leader of the digital nomad era,” he writes.

Future strategy professor Lee Sang-zee explains the strategy for the IoT market. He predicts that in the future, nearly all industries will be based on the IoT.

“There will be fierce competition among sectors to create their own applied platforms and dominate the market,” Lee says. “This will inevitably be followed by efforts to converge various IoT data between different applied platforms from different applied fields. Based on object recognition identification, IoT data-sharing platforms with complete interoperability (IDaaS, IoT Data as a Service) will emerge.”

Professor Kwon Dong-soo, mechanical engineering, talks about robotics industry. “The future robotics market is forecast to have great potential. Despite the existing concerns about robotics, it’s up to the people to choose the direction that this technological advancement pursues.”

Professor Cho Dong-ho, who studies electrical engineering, gives us an overview of ICT of the future. “Ultimately, the future means smart sensors and computing systems embedded in people, objects and nature ― both on Earth and in space ― as well as personalized 3-D services via mutually cooperative communications and big data processing; in addition to a cybersystem that utilizes the collected information to minimize various hazards,” he writes. “Information and communications technology will help further digitize existing industries and, by doing so, help create innovative and diverse new industries.”

Professor Lee Doheon, who studies bio and brain engineering, notes that virtual human computer systems are a technology that can help push biomedical health care to a whole new level.

“In addition to the development of new drugs, the technology can be used to create a personalized virtual system that considers individuals’ genetic or epigenetic differences. This will allow for a personalized health care plan by monitoring and preventing highly probable illnesses, and provide optimized and accurate treatments.”

He says the method of decision-making itself is changing. This is the new paradigm brought forth by big data, which can be used to establish a new business structure that fits the current times.

Giving his views on the future of Korean culture, professor Jeong Jaeseung notes that many Asian countries will receive Korean culture enthusiastically, because it is a future they will soon experience themselves. Moreover, “many Western countries will turn their attention to Korea to discover the creative drive that they have lost.”

The features also include interviews with professor James Allen Dator, director of the Hawaii Research Center for Futures Studies, who is considered one of the inventors of futures studies, and professor Lee Kwang-hyung, head of KAIST’s Graduate School of Future Strategy.