Robots to evolve to learn, feel

By Korea Herald
Published : Aug 13, 2014 - 21:14       Updated : Aug 14, 2014 - 11:09
If we had to single out one recent technology that has significantly influenced human society, smartphones would undoubtedly be at the top of the list. Apple’s iPhone and Samsung’s Omnia hit the markets in 2007, which opened the doors to a new era of one smartphone per person. Their affordable and compact hardware provide the functions of wireless Internet, a camera and a phone. Application stores also grant the user functions and content of the individual’s choosing.

Ten years since the introduction of the first smartphone, the device has become a necessity in modern society. People have not only grown accustomed to the information-based services it provides, but they are yearning for more.

New demands are emerging for more substantive and physical services that go beyond just providing access to information. For example, in Spike Jonze’s film “Her” (2013), Samantha, played by Scarlett Johansson, is an advanced operating system that understands people and emotionally connects with them. Or the household robot that cleans and cooks in the movie “Robot & Frank.”

And it appears that even in reality, robots are indeed about to meet the more demanding needs of consumers. For instance, Pepper, a robot made by Japanese firm Softbank, and JIBO, a family robot introduced by Massachusetts Institute of Technology, could be considered the preliminary attempts. The fact that these robots can provide tangible services compared to smartphones that just make information more accessible, this can be a revolution of a scale that we have never witnessed. What will the future hold for humans, robots and their coexistence?
The changes in the population structure ― low fertility, an aging society ― will also greatly impact both lifestyle and industrial structure. In response, robots of the future ― across various fields, such as industrial, household, education and entertainment ― will collaborate with people in order to effectively perform complex tasks. Therefore, research is focused on creating robots that can intellectually and emotionally bond with humans, recognize people’s needs and respond accordingly.

Though the various robots currently in operation possess the intellect to perform the task they were designed and programmed to do, future robots are expected to be significantly different because of their heightened learning ability.

These robots should be able to meet a user’s demands by being able to learn and execute new services that were not originally programmed and also adapt to completely new environments and circumstances.

But a robot’s learning ability is not enough, because it needs something to learn ― data. Endless amounts of data are necessary for the robot to freely communicate in various surroundings and situations.

As such, cloud-computing technology is being applied to robots, so that robots can consolidate, share and disperse data among each other. Cloud-computing robots will learn faster, hence, improve their services. It can allow applications and upgrades for robots similar to the way smartphones operate.

Additionally, the way data is collected will also change in future robots. Currently, robots collect information through various sensors, such as cameras, microphones and touch sensors that are mounted on the robot, but it is anticipated that with further developments in the Internet of Things, robots in the future should be able to gather larger amounts of data more quickly and accurately than ever before. 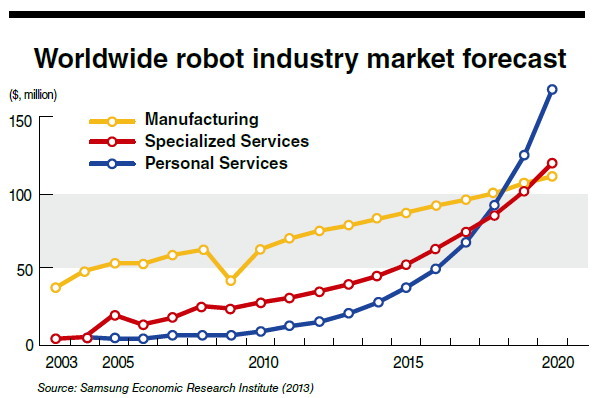 Developments in robotics are occurring at this very moment and, as long as it continues, highly intelligent future robots will gradually merge into society to exist among mankind. The future robotics market is forecast to have great potential.

Despite those who express their concerns about robotics and oppose the development of robots for it could pose a threat to mankind or be used in unlawful ways, the history of humanity and scientific discoveries and advancements reveals that similar concerns had always existed. Just as the atomic bomb led to the development of the nuclear power plant and ballistic missiles sparked space exploration, it’s up to the people to choose the hue of the future of robots.

As robotics develops at a rapid pace and our shared future with robots is not far, now is the time to set the social, ethical and legislative boundaries about robots.
By Kwon Dong-soo, KAIST professor of mechanical engineering