In 1982, IBM introduced its first PC, and TCP/IP Internet protocol was formally standardized. In 1993, the World Wide Web became accessible to the public, and this opened the Web-based Internet era, in which computers were connected by networks and people shared and exchanged digital content. In 2007, Apple released the first smartphone (iPhone) with a brand new iOS operating system, and established an entire ecosystem for trading apps. Thus, the age of mobile Internet entered full swing. Around 2010, when the distinction between voice and data communication blurred, devices began to be connected to the Internet, just like people. This was the beginning of the IoT ― the Internet of Things ― in which every object is uniquely identified and virtual access is available, just like the Internet.

In 2009, 900 million devices were connected to the IoT, and the figure skyrocketed to 2.6 billion in 2013. The number is expected to rise to 26 billion by 2020. In 2013, the global IoT market stood at $200 billion. The market is expected to grow to $1 trillion by 2020, with devices/components taking 38 percent, SI/platform 30 percent, services 29 percent and network taking 3 percent of the pie. Meanwhile, the domestic IoT market was worth 2.3 trillion won ($2.2 billion) in 2013 and is projected to reach 17.1 trillion won by 2020. It is worth noting that, in May 2014, the South Korean government released an initiative to increase the value of the domestic IoT market to 30 trillion won. 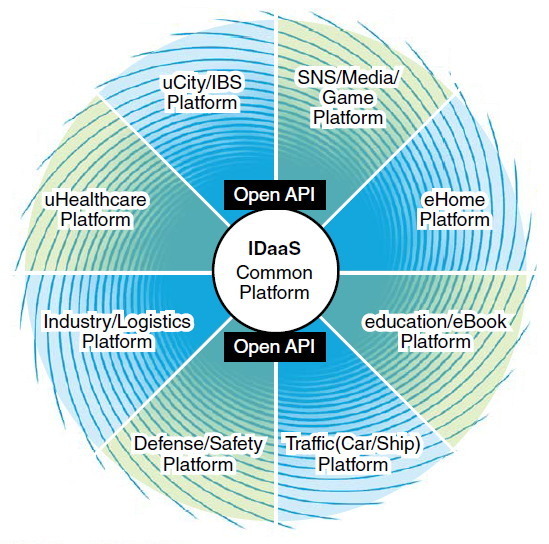 The IoT value chain consists of five sectors: service, platform, network, device and security ― SPNDSe for short. Of these, security is particularly important as it prevents hacking and information leaks, which are fatal to the development of IoT products and sevices. The other four sectors will be adopted to develop a variety of IoT products and services. Therefore, each of these sectors require customized and optimized security solution, which will be built in at the product- or service-planning phase.

In addition, the IoT requires an identification scheme to distinguish different devices to attain interoperability. Internet Protocol serves as the guideline for transmitters and receivers on the Internet to exchange information through a packet switching network. Open Systems Interconnection is the standard technology that enables address assignment for devices and packet assembly and disassembly. Once the existing Internet Protocol 4.0 (IPv4), which uses 32 bits, ran out of address resources, the next-generation Internet Protocol (IPv6), which uses 128 bits, was established. This is to be the physical address used to distinguish objects that connect to IoT at a hardware level.

Countless sensors or controllers connected to the IoT produce diverse and massive amounts of big data, which are created near real-time from remote data reception, analyzed and processed. There are also a variety of other resources composing IoT data, such as production information of items with RFID tags, logistics and sales information, news and media information, pictures and movies as well text shared by SNS users, information manually or automatically created by private or public organizations’ ICT systems, information from the virtual worlds or games and so on. To efficiently and economically provide useful services through IoT-based systems, data mining and analysis and interoperability will become more important than ever. To attain interoperability with minimized data access time, object recognition and identification is a prerequisite, as they facilitate access and utilization of data that is broken down and saved among various distributed cloud servers. Relevant technologies are being developed, but they are still in their infancy.

Based on past examples, the core sector in the IoT value chain that is forecast to drive the market is the platform. In the early Internet era, Microsoft led the market with its Windows operating system platform. The smartphone era has been taken by two hegemons, Apple and Google, which have established integrated platforms that combine smartphone operating systems with the app store ecosystem. In the era of social media, dominated by Facebook, Twitter and Pinterest, it is the individual service platforms, and not operating systems, that are leading the market.

What kind of platform will dominate the market in the age of hyperconnected IoT?

In the future, nearly all industries, including transportation (smart cars and ships), security and safety, industry and logistics, medical services (uHealth), construction (uCity and IBS), home appliances (eHome), education and media and social media, gaming and virtual reality will be based on the IoT. There will be fierce competition among sectors to create their own applied platforms and dominate the market. This will inevitably be followed by efforts to converge various IoT data between different applied platforms and different applied fields. Based on object recognition identification, IoT data-sharing platforms with complete interoperability (IDaaS, IoT Data as a Service) will emerge. IDaaS will provide open APIs through open API store similar to the current App store. It is strongly expected that IDaaS will become a common platform for most applied platforms from every sector to converge, and then IDaaS will become the eye of a storm of innovation that will lead the IoT market.