While people can now gnaw on Cherrier’s creations in countries as far away from his native France as Singapore, Japan and as of July 17, South Korea, the far-reaching global spread of the star baker’s bread does not seem to have diminished the artisanal bent of his work.

If his first South Korean outlet, which opened in Seoul’s Seorae Village last week, is any indication of how hands-on this fourth generation French baker is, then Cherrier is very much so. He proudly praises bakers he trained himself for the new shop while also making sure everything is in place, from his baguettes to his croissants.

His keen attention shines through in the crusty curry-infused baguettes, with their chewy density, elastic spring and airiness. His famed rye and red miso bread is spot-on, moist and redolent of burnt caramel, walnuts and butterscotch, all aromas emerging from the Japanese akamiso used to make the tasty loaves.

Bread is not the only thing that Cherrier is hands-on about. Before he sits down for his interview, he quickly opens the door for customers who are exiting.

“The best thing when you are an artisan is to share with the customer,” Cherrier, 35, explained.

The desire to share, says Cherrier, was what prompted him to open shop outside of France like his brand new Seoul outlet, which he launched with a Korean licensee. That, of course, and his love of travel.

Travelling seems to play an important role in how Cherrier approaches his bread, appearing to influence decisions to add not-so-traditional ingredients like squid ink and black sesame to classic French baguettes and other breads.

“When I spend time in other countries, I try to go to the traditional restaurants in each country,” he said. “I learn a lot like this.”

Cherrier, in fact, has already been inspired by Korean food, incorporating perilla leaves and doenjang into the pastries and bread at the new Seoul outlet.

It is this tendency to bring a boundary-free, globalized edge to bread that has won Cherrier a reputation as a maverick bread savant with a classical foundation.

Then, not to skirt the issue, there is all his good looks, with more than one media outlet referring to him as “sexy” or describing him as the Brad Pitt of bread, baking, bakeries and the like.

When asked about his celebrity status, Cherrier, who does not seem to mind all the buzz and is not afraid to tousle his much-photographed caramel locks or playfully wink his hazel eyes, answers with a chortle, “That’s quite funny.”

By funny, he seems to mean that he really sees himself as a baker, not some dough-kneading heartthrob.

Three generation of bakers and pastry chefs precede him. Add to that formal training at Ferrandi and the Ecole de Boulangerie et de Patisserie Paris, and it would be an understatement to say that Cherrier is more than qualified for his job.

The potential irony of it all is that it took him several years to get around to opening a bakery.

Before he opened his first shop, Cherrier acquired some serious culinary experience at chef Alain Passard’s L’Arpege and Lucas Carton, when Alain Senderens was chef.

It was from those stints that he began to focus on pairing bread with other food, Cherrier revealed, giving him pause to consider what food or condiments he wants to enjoy with a loaf-in-the-making before actually creating the final product.

Cherrier also consulted, starred in food shows and authored cookbooks before finally opening his own bakery in 2010.

“I missed it,” he said of why he returned to his bakery roots.

Now, with over 10 outlets worldwide, Cherrier is poised to open two more in Australia and South Africa by early 2015, and has another Seoul outlet slated to open in Samseong-dong this October.

Until then, Cherrier’s mouthwatering praline cream-filled Paris-Brest pastries, as well as other nosh-worthy tidbits and breads, will be available at his Seorae Village shop.

Though a mere handful of days have passed since the bakery opened, the place is already teeming with flour fiends, who are snatching up his famed croissants so fast the staff is kept busy bringing out trays loaded with the fresh, buttery pastries.

As soon as the interview is over, Cherrier rushes to pitch in, joining his team in the kitchen to do what he does best: make bread. 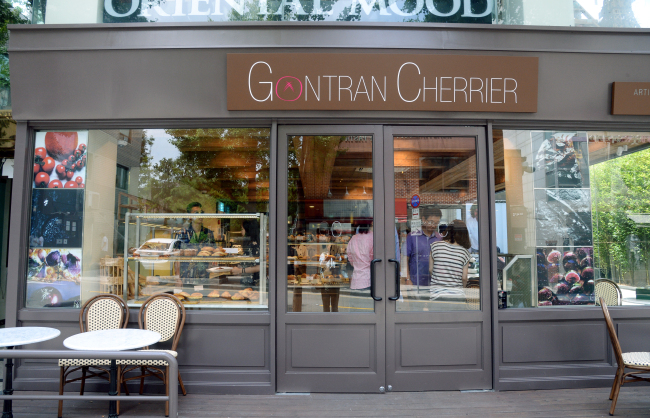