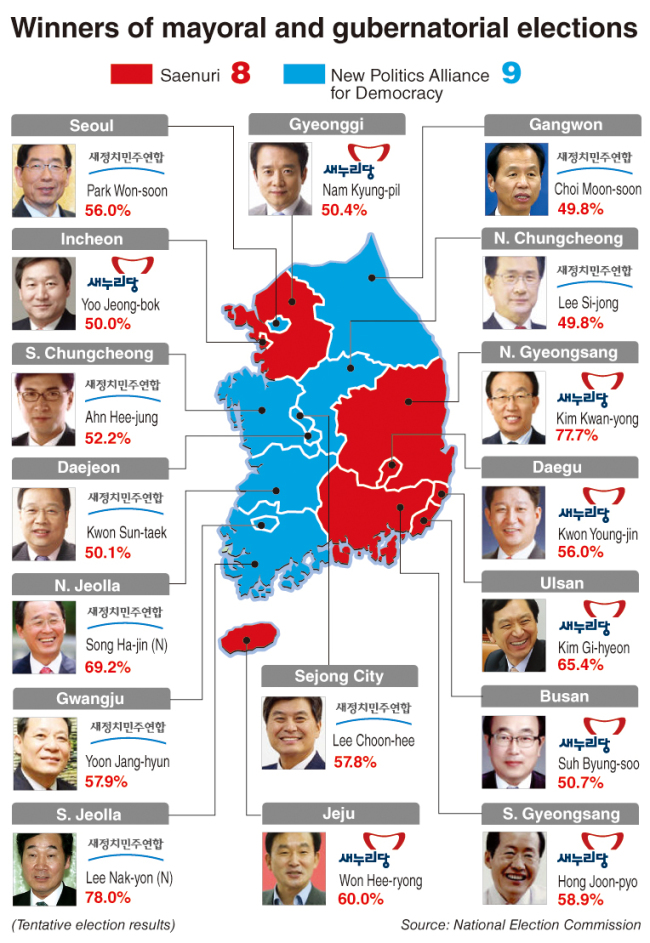 Although the NPAD fared well, the main opposition is not home free, with mixed exit poll figures indicating that its strategy of using the local elections to “pass judgment” on the Park Geun-hye administration is likely to lose steam.

The elections were seen as a referendum for the administration in the wake of the April 16 ferry disaster that left more than 300 people dead or missing. The government has been sharply criticized for its poor handling of the accident.
Among the NPAD’s victories, Park Won-soon took Seoul beating Saenuri Party’s candidate Chung Mong-joon with a comfortable lead of over 12 percentage points to win his second term.

The NPAD also took the Chungcheong provinces, which traditionally have conservative tendencies, and succeeded in defending Gwangju against a former colleague, despite earlier worries.

The ruling party, which went into the local elections with a decreased ratings, won some of the more hotly contested areas.

Voting took place at 13,665 polling stations across the country, with each voter casting seven ballots to select 3,952 chiefs and legislators for metropolitan, provincial and lower-level administrative offices. Wednesday’s election also saw the selection of new education superintendents for the 17 metropolitan cities and provinces.

As of 8 a.m., Saenuri Party figures were seen as being close to taking 124 of the 224 lower-level administration chiefs’ posts contested on Wednesday. In comparison, NPAD figures had or neared victory in 72 areas.

The races for metropolitan and provincial educational chiefs’ posts, in contrast, was a resounding victory for the progressives. Although educational superintendent candidates are not party-nominated, they are divided by progressive and conservative ideologies.

Of the 17 education superintendents’ posts, 13 were taken by progressives.