A new market called for companies to adopt innovative strategies that include safeguarding their inventions by filing their intellectual properties as efficiently and globally as possible amid growing patent disputes.

And this is where the so-called Intellectual Property Five comes in to accommodate the private sector’s increasing need for an efficient and transparent process of patent application filings worldwide. 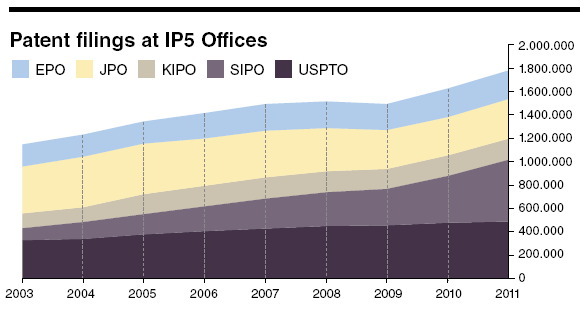 Consisting of five IP offices in the U.S., Europe, Japan, China and South Korea, the IP5, otherwise known as the G5 IP economies, would be gathering in Busan, Korea this week. They agreed on the adoption of the Dossier Provision Policy, which provides detailed guidelines for opening up access to file wrapper information and the Framework for Promoting Public Access of File Wrapper Information. In addition, the IP5 heads will adopt an Action Plan for Implementing Dissemination of Patent Information. This will make it possible for IP users to use patent information, including bibliographic data, English abstracts, and publications for patent applications and granted patents from July 1.

“We will discuss issues that can help boost patent data exchanges, work-sharing and examination quality,” Kim Young-min, commissioner of the Korean Intellectual Property Office, in a written interview with The Korea Herald.

Kim added that the forum of the IP5, which will take place for the second time in Korea between June 4 and 6, aims to further develop the Patent Cooperation Treaty and the Patent Prosecution Highway in line with efforts to globally harmonize patent filing procedures, and protect IPs.

This basically follows the vision set during the IP5 meeting held in October 2008 in Jejudo Island where the Heads of the five patent offices shared a common goal ― “The elimination of unnecessary duplication of work among the offices, enhancement of patent examination efficiency and quality, and guarantee of the stability of patent right.”

As the global market becomes more integrated, the IP5 needed to address and resolve issues and problems such as increasing patent backlogs, overlapping and duplicated patent examinations and filings.

Global cooperation efforts were needed then among the five economies, where currently more than 90 percent of worldwide patents are being filed, to readjust and refine their systems to help boost efficiency by avoiding, for instance, unnecessary paperwork in registering the same IPs in multiple markets.

In 2013, the IP5’s major breakthrough was establishing a plan for the so-called Global Dossier enabling real-time search for patents under screening and their registration outcomes at the five offices.

“The cooperation among the five patent offices will accelerate the development of a new infrastructure that would ensure IP creation, protection and application in the knowledge-based 21st century,” Kim said.

“The meeting will serve as an opportunity not only to facilitate public access of file wrapper information and the dissemination of patent information but also to build a consensus that IP5 cooperation can be further strengthened by reinforcing cooperation and communication between the IP5 offices and users.”