“The central bank should change its role (on economic growth),” the Bank of Korea’s governor said at a news conference.

The BOK’s primary objective is price stability, but the public is calling for a more active role on economic stimulus, Lee said.

“We need to make sure that our monetary strategy contributes to the growth of the country as well as ensuring price stability.”

The new central bank chief hinted that he would consider tools other than the policy interest rate to guide Asia’s fourth-largest economy. But, he declined to further elaborate on what they would be.

His remarks came on the heels of the first policy meeting under his stewardship. Lee and the six-member monetary committee decided unanimously to leave Korea’s base rate unchanged at 2.5 percent for an 11th consecutive month, as was widely expected by market analysts. 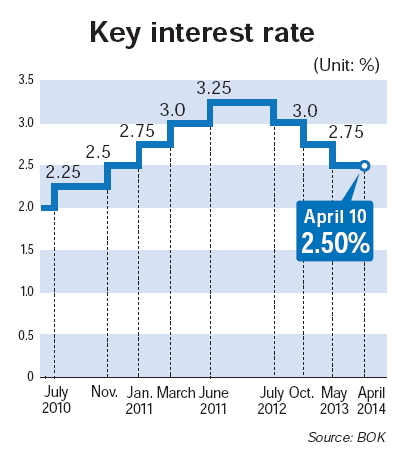 “The trend of economic recovery in the U.S. has been sustained and the sluggishness of economic activity in the euro area appears to have continued to ease, while economic growth trends in some emerging market countries have weakened somewhat,” the BOK said in a statement.

The BOK lifted its economic growth projection to 4.0 percent this year, from 3.8 percent in its January prediction. It predicted the economy would pick up further to 4.2 percent in 2015, also up from the previous outlook of 4 percent.

Despite signs of an economic recovery, Korea’s inflationary pressure still remains tame. The country’s consumer price increases have remained below 2 percent for the longest time since November 2012.

Some critics insist that the BOK should readjust its mid-term inflation target, which it set at between 2.5 percent and 3.5 percent for 2013-2015.

Lee admitted Thursday that the current price stability was not sufficient to ensure macroeconomic stability.

But he dismissed the call to change the mid-term inflation target, noting the current low level of inflation was due mainly to “temporary supply factors.”

“Inflation has remained below our target due to unusual supply side-factors. We expect inflation to rise to mid 2 percent levels in latter this year,” Lee added.

The BOK predicted that the inflation would pick up to 2.7 percent in the second half of 2014, within its target band.

There are also increasing worries over the local currency, as a stronger won makes the value of assets in foreign currencies smaller when converted to the won.

Commenting on the won’s rapid appreciation against the greenback, Lee said the BOK will keep a close eye on volatility in the won.

Lee, a former senior deputy governor of the BOK, took over the position from Kim Choong-soo on April 1.

He vowed Thursday to guide the monetary policy in close cooperation with the central government.

“We should make efforts to exchange information to reduce the gap in which we view where the economy is going,” he added.