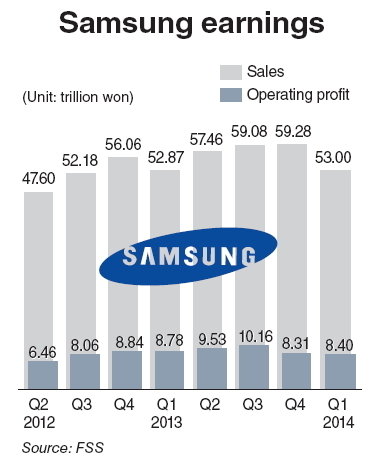 “The narrowing profit margin is because its smartphones became higher-end and required costlier parts,” said Kim Sung-in, a senior analyst at Kiwoom Securities.

Despite such setbacks, some factors appear favorable to its earnings. Samsung’s semiconductor segment saw a satisfactory performance as the price of dynamic random-access memory was stable for the January-March period. The business is expected to post around 2 trillion won in operating profit, according to Kim.

For the second quarter, sales of the company’s new flagship smartphone Galaxy S5 are expected to prop up earnings.

“Samsung will post 9.3 trillion won in the second quarter,” said Lee Min-hee, an analyst at I’M Investment & Securities. “The global rollout of its new handset Galaxy S5 will boost its display business,” he added.

The consumer electronics business is also expected to pick up with a forecast increase in the demand for television sets thanks to global sporting events such as the 2014 World Cup in Brazil.

However, not all analysts are upbeat about second-quarter earnings as the sales prospects of the Galaxy S5 could be lower than its predecessor’s.

Samsung Electronics’ shares dropped 0.21 percent to close at 1,394,000 won on the Seoul bourse on Tuesday.