SK Telecom, KT and LG Uplus have all demonstrated LTE-Advanced technologies, which can offer data rates of 450 megabits per second. 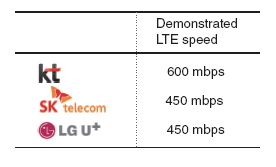 “With the LTE-Advanced technology, users can download an 800 megabit movie in 15 seconds,” SK Telecom official said.

Apart from the 450 mbps LTE-A, KT has additionally demonstrated the world first LTE-A Het Net, which combines the technology of heterogeneous networks. It offers download speeds of up to 600 mbps by combining LTE-A and Gigabit Wi-Fi.

The data transmission speed is eight times faster than LTE, the company said.

“This technology can increase data speed by minimizing electronic interference between base stations,” an LG Uplus official said.

Ultimately, this allows the company to receive signals from up to eight antennas to select the best signals and remove indirect signals that may impair the speed, LG Uplus said.

“The technology is expected to be commercialized in the second half of this year,” said Choi Taek-jin, head of LG Uplus’ technology and strategy division.

Analysts believe that the commercialization of LTE-Advanced technology will take some time.

“The telecom companies are still in the process of developing chip sets, and the additional allocation of 20 Mhz bandwidth is also necessary. They may seek commercialization of LTE-A technology next year,” an industry source said.