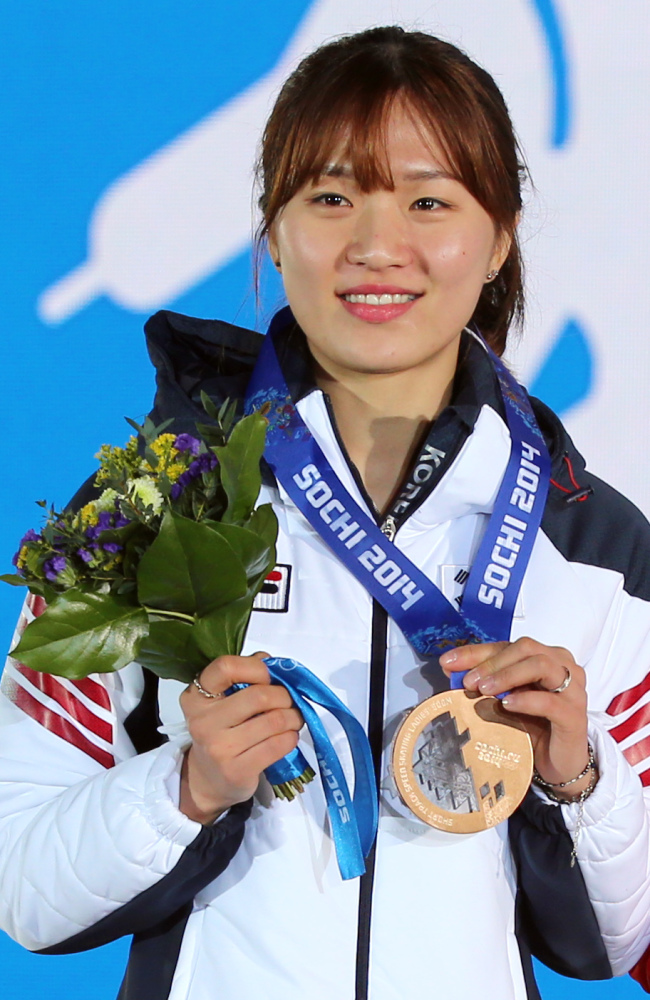 Short-tracker Park Seung-hi wins the bronze in the women’s 500 meters at the Sochi 2014 Winter Olympics on Thursday. (Yonhap)

In a frenetic race that saw three of the four finalists wiped out, Park recovered to win South Korea's first short track medal in Sochi.

After getting called for a false start, Park charged out in front for an early lead. Before the skaters could even complete the first lap, Elise Christie of Britain took out Arianna Fontanta of Italy while jostling for position. Park also lost her balance in the mad scramble, and she fell for the second time as she tried to get back to her feet.

Li Jianrou of China took the gold while Fontana won the silver.

Christie received a penalty for her role in the incident.

Prior to Park's medal on Thursday, Chun Lee-kyung, with the bronze in 1998, had been the only other South Korean medalist in the event.

The competition in Sochi was wide open thanks to the absence of Chinese star Wang Meng, the two-time reigning Olympic champion in 500ｍ and world record holder who is missing in action with a broken foot.

Also on Thursday, Sin Da-woon and Lee Han-bin made it out of the heats in the men's 1,000ｍ.

In the heats, 32 skaters were divided into eight groups of four, with the top two skaters from each reaching the quarters.

Sin finished second in the seventh group and Lee finished atop the final group.

The quarterfinals, semifinals and finals will all take place on Saturday.

Viktor Ahn of Russia, the bronze medal winner in 1,500ｍ from Monday, also qualified for the quarterfinals. Born Ahn Hyun-soo in South Korea, the 28-year-old became a Russian citizen in 2011. He won three Olympic gold medals and five world overall championships for South Korea, and is now seeking the first Olympic short track gold for his adopted country.

Sin and Lee are trying to bounce back from their disappointments in the 1,500ｍ on Monday. They were first and second in their semifinal race with two laps left, when Sin skated into a rough patch and fell, tripping up Lee trailing behind him.

Sin was relegated to the B final. Judges awarded Lee a spot in the medal round on the grounds that he'd been interfered with in the semis, but he ended up in sixth place among seven skaters in the final.

Later Thursday, the men's 5,000ｍ relay team crashed out of the semifinals. Sin and Lee joined teammates Lee Ho-suk and Park Se-young against the Netherlands, the United States and Kazakhstan.

South Korea was leading with four laps to go, when Lee Ho-suk was tangled up with Eduardo Alvarez of the U.S. as both skaters fell and slid into the wall.

Though Alvarez appeared to make contact with Lee in video replay, the U.S. team received a spot in the A final. The Netherlands and Kazakhstan automatically qualified as the top two finishers in the group. Joining them in the A final on Feb. 21 will be Russia and China.

South Korea will skate against Canada and Italy in the B final. (Yonhap)