Having presided over a robust economy in a region of sick-man peers, the center-right Christian Democratic Union and its sister Christian Social Union of Bavaria won more than 40 percent of the national vote, bringing Merkel to within five seats of a tantalizingly rare parliamentary majority. Merkel’s political standing, already unmatched among her European peers as the only leader to have survived the Euro crisis, has never been stronger. 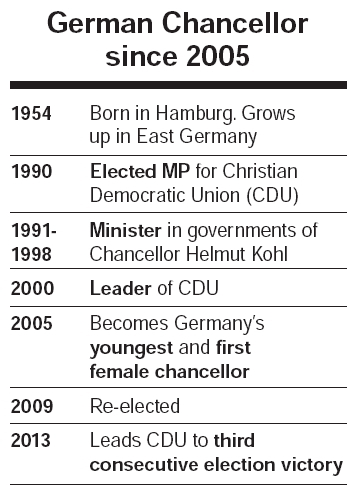 Already media have seized on the possibility of Merkel surpassing former U.K. Prime Minister Margaret Thatcher’s record as the longest-serving female leader, a narrative in keeping with years of inevitable, yet dubious, comparisons to the “Iron Lady.”

But such talk in the world of politics is premature. The list of political leaders felled in their third term includes Thatcher herself as well as former British leader Tony Blair.

Merkel also faces awkward choices in forming a ruling coalition, despite her impressive election result. With the pro-business Free Democratic Party, her previous coalition partners, wiped out from parliament, Merkel must choose from an assortment of unfriendly potential partners from the left of politics.

And then there is Europe. While Germans on the whole would appear relatively satisfied, citizens in weaker members of the Eurozone have at times resented what they have seen has German dominance of the European agenda. Moreover, despite the worst of the crisis seemingly having passed, the region is still beset by low growth and high unemployment. The world will naturally look to Merkel to bear some responsibility for fixing the mess, even if she is not the official leader of the European Union.

Merkel’s greatest challenge yet will be restoring confidence in Europe as an economic and political powerhouse.