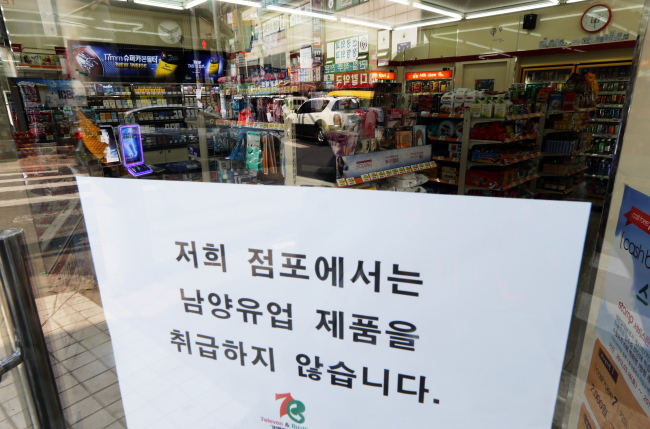 Namyang Dairy, one of Korea’s biggest dairy giants, is taking a turn for the worse following a nationwide uproar caused by one of its salesmen ranting and swearing at its distributor.

Ever since an audio file that contained the conversation between Namyang’s salesperson and the distributor was exposed last week on the net, including YouTube, consumers have posted messages on their blogs or taken to the street holding placards urging the general public to stop buying its products ranging from milk and cheese to yogurt and baby food.

The pressure has spread to convenience stores to suspend sales of all Namyang-branded products, with the public urging a rapid implementation of measures for fair business practices. The so-called economic democratization led by the new government aims to root out Korea’s long-standing “corporate caste system” where conglomerates commonly abuse their power against suppliers that are generally pressured to cut prices and deal with more chaebol goods than they can handle.

Other dairy makers such as Seoul Milk and Korea Yakult are likely to take a hit by this latest fiasco as the Fair Trade Commission has reportedly launched a probe into the industry over whether they unfairly pressured and dumped their products onto their distributors in order to meet their sales quota.

The two-minute audio file contained verbal abuses against the small distributor who was seemingly older than the Namyang salesperson and pleaded that he could not store any more of the dairy company’s products for distribution.

However, the salesperson swore at him, saying that he either take its goods, or throw them away and go bust, while threatening that he would "kill" the distributor.

Its eruption on the net, reminding the public of actor Christian Bale’s rant against a crewmember during the shoot of his movie few years ago, not only drove Namyang’s share prices to spiral downward, but also damaged its credibility of being a socially responsible company.

Despite Namyang’s apology posted on its homepage, the public was not satisfied, claiming it lacked sincerity.

Its stocks continued to take a nosedive over the last five trading days, falling once below 1 million won ($919), further beset by Namyang chairman Hong Wong-sik unloading his shares amid the public outcry.

Industry sources said this incident just shows the “tip of the iceberg” regarding relations between conglomerates and their small and medium suppliers or distributors, which never have been equal business partners.

Demanding price cuts of suppliers’ parts and goods for conglomerates is common.

For instance, suppliers get nervous whenever executive reshuffling occurs at domestic conglomerates as the new executive would undo previous contracts signed by his predecessor and demand to renegotiate lower prices, an industry executive said.

Conglomerates also generally do not want to see their suppliers grow “too big” as that would make it difficult to keep SMEs in their “shadows.” This is one reason a growing number of SMEs seek to supply to overseas customers even though it is much more difficult to tap multinational companies. But overseas companies are more known to more fairly select and treat their supplying partners through proper open bids and evaluations, another industry official said.

Namyang’s incident comes weeks after when an executive of steel giant POSCO’s energy subsidiary allegedly mistreated a flight attendant over food service. Both the executive and Namyang’s salesperson had been let go.

Eliminating malpractices and unfair acts by conglomerates has been one of President Park Geun-hye’s cornerstone policy pledges to sustain the economy based on creativity and fairness.