On her first overseas trip as president this week, Park Geun-hye will also become the first Korean president to visit the United States since the free trade agreement between the two countries took effect in March last year.

Observers said the trip also reflects her intention to elevate the two countries’ alliance to a higher level and expand it into the economic domain.

During the visit to the United States, the 51-member business delegation will seek to dispel U.S. investors’ concerns about the South Korean economy caused by the North Korean military threat, industry sources said.

The delegation plans to join Park in a dinner to commemorate the 60th anniversary of the Korea-U.S. alliance in Washington and discuss bilateral economic cooperation in a roundtable of CEOs from the two countries.

On the economic front, the United States had a pivotal role in helping South Korea rebuild its economy destroyed by the Korean War (1950-53). Since then, the two countries’ economic relations have made significant progress. Korea’s exports to the U.S. increased from $400 million in 1970 to $50 billion in 2010. The nation’s imports from the United States also soared from $600 million to $40 billion during the same period. The United States is South Korea’s second-largest trading partner with Seoul’s exports to Washington topping $58.5 billion in 2012. 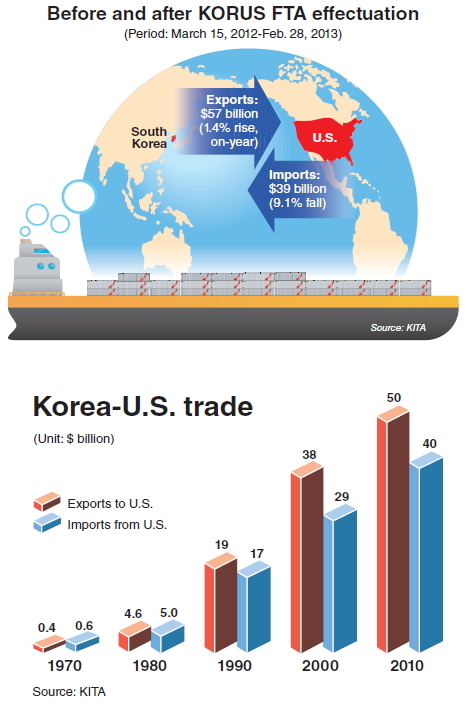 Though the initial disputes now seem to have subsided, disagreements remain over whether the trade deal helped Korea’s economy, as the government had guaranteed.

The new president has so far made few comments on the issue, but local trade-related entities, such as the Trade Ministry, the Korea Customs Service and the Korea International Trade Association, have largely stressed the gains from the free trade agreement.

“The influence of the FTA was visible in the fact that the exports of tariff-cut items such as auto parts and petroleum products rose by 10.4 percent, whereas the exports of non-benefit items fell by 3.6 percent,” said Choi Dong-kyu, the ministry’s FTA policy director.

The level of foreign direct investment from the U.S. into Korea, too, soared by 113.6 percent to $4.5 billion during the same period, indicating a clear change in the country’s trade environment, he said.

“The significance of the Korea-U.S. FTA, however, goes beyond these sets of trade figures,” Choi added.

“By preoccupying one of the world’s largest markets, Korea won an initiative in the global economic power game.”

The American Chamber of Commerce in Korea agreed.

“By signing a high-standard agreement such as the Korea-U.S. FTA, Korea sent a strong message to potential investors around the world that they wanted to establish a more open and transparent marketplace,” said AMCHAM Korea president Amy Jackson.

“The FTA will certainly be recognized as an important third pillar to the United States and Korea’s already strong political and military alliance.”

U.S. Secretary of State John Kerry, during his recent visit to Korea, also referred to the trade pact as a “great accomplishment,” stressing the strong partnership between Korea and the U.S.

His positive appraisal came despite deterring factors such as the North Korea nuclear issues, the weakness of the Japanese yen and the ongoing global economic slump.

These favorable reviews from the government and trade sectors, however, were also faced with persistent opposition. Some claimed that the FTA had inflicted irreversible damage on the local agricultural and livestock industries, while others blamed the conglomerates for monopolizing all the resulting trade benefits.

“The government claims that the utility rate of the Korea-U.S. FTA exceeds 60 percent but most of the earnings were made by conglomerates,” said Chung In-kyo, professor of economics at Inha University.

Small and medium-sized companies, too, saw some increase in their exports to the United States, but are hampered by a lack of manpower and trading system, he said.

Kim Hyung-joo of the LG Economic Research Institute pointed out that one of the key indexes of evaluating the Korea-U.S. FTA is the participation rate of SMEs.

The agricultural sector, which was a key point of concern, put up a relatively good defense against cheap U.S. agricultural and livestock goods, but imports of oranges and cherries soared and affected the corresponding local farms, according to the Ministry of Agriculture, Food and Rural Affairs.

Despite these complex economic ties, the industrial cooperation between the two countries largely remained at a passive level.

Key officials of the Federation of Korean Industries visited the United States in January to participate in the meeting of the U.S.-Korea Business Council, a premier business advocacy organization representing top U.S. companies investing in Korea.

This was, however, one of the very rare interactions that have taken place between the business circles of the two countries, according to the FKI.

“In order to maximize the effects of the Korea-U.S. FTA, it is crucial that not only the public sector but also the private companies communicate more actively with their counterparts,” said an FKI official.