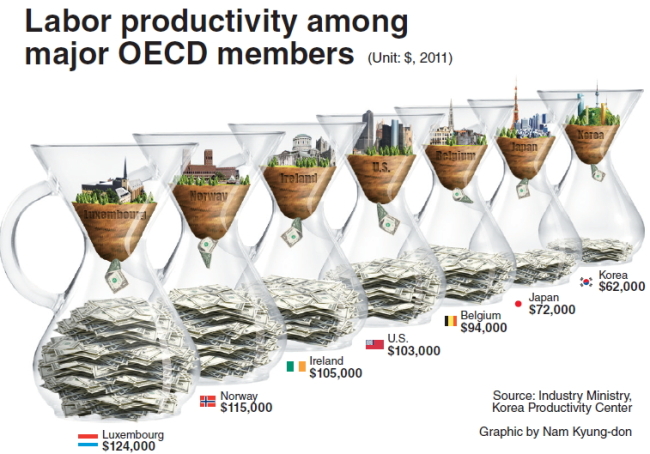 Korea’s labor productivity ranked 23rd among 34 members of the Organization for Economic Cooperation and Development in 2011, moving up one notch from 2010, the government said.

In 2011, the total output by each Korean worker came to $62,185, which amounted to 79.9 percent of the OECD average but 60.6 percent of that of the U.S., according to the Ministry of Trade, Industry and Energy.

The ministry noted that Korea’s labor productivity grew at an average annual rate of 2.92 percent, the sixth highest among all OECD nations, in the 2001-2010 period.

The hourly production of each Korean worker was the 28th highest among 34 OECD countries while its average working hours were the second highest, meaning Korean laborers were working longer, but producing less than most other OECD countries.

Korea’s per capita production of laborers in the manufacturing sector was the second highest among 19 OECD countries with such data, while its service industry showed one of the lowest per capita outputs among OECD members.